Over the last year or so I have shared an alternate method for acquiring the impulse response of a system that does not require an on-site computer. This method is meant to augment, not replace, dedicated measurement systems (i.e. EASERA, TEF, Smaart, etc.). It can prove useful in cases when it is not possible or practical to use a PC-based system.

The method involves playing a log-sine sweep over the system and capturing it with a portable recorder. The freeware Gratisvolver™ program (www.catt.se) is used to extract the IR from the recorded sweep. This is a manual implementation of a what a dedicated measurement system does to get the IR. I refer to it as the “deconvolution method.” 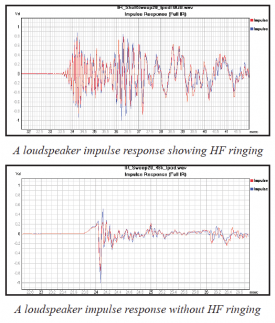 All measurement methods have their drawbacks. The downside to the deconvolution method is that since it uses WAV files to stimulate the system and record its response, there can be sample rate issues and some resultant artifacts. These can include spurious audible glitches and “birdies” in the sine sweep and possibly high frequency ringing in the extracted impulse response. Neither artifact seems to affect the acoustic metrics or convolutions made with the IRs, except for possibly a slight rise in the noise floor. But, they are annoying none-the-less so a solution has been sought. The problems appear to be device-dependent, so users of this method should find an audio playback and recording device that works and then stick with it. The deconvolution method works flawlessly using my Lightspeed Delta X10 loudspeaker as the source. The integral CD player drives either the internal loudspeaker or the sound system through the line output. I’ve had to experiment with various WAV editors and CD burning applications to produce a glitchfree playback CD. Sony Sound Forge (for resampling) and CD Architect (an included CD burning software) will produce a glitch-free source CD.

The log-sine sweep appears to be a difficult waveform for CD players in general. It will reveal shortcomings in both hardware and software that are (apparently) not very audible on music and speech waveforms.

The Apple Ipod™ also works well for playing the WAV file into the system-under-test, so long as a 48kHz sample rate is used. I use an Ipod Nano for this 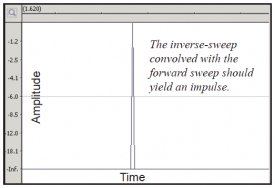 purpose, but have also tested the Ipod Video.

For recording the sweep at the listener position, I get flawless results with the Marantz PMD-660 and Sony PCM-1D portable recorders. I believe that a host of USB and Firewire A/D converters will work as the recording device, but one should carefully test them to be sure. Once you find a hardware/software combination that works, it should always work. The products mentioned work without problems, but there are doubtless other products that will, too. The burden is on the user to “test their tester” when putting together a measurement system. The extra experimentation on the front end will result in an extremely useful compliment to your acoustical measurement arsenal. pb