Recently I was having a morning coffee at the local Panera Bread Restaurant. The Wi-Fi is free, the bagels are great, and the coffee is tolerable as a second cup. While working away at my PC my table was seized by a very loud and very annoying low frequency tone. It was modulating at a low rate and loud enough to produce a queasy feeling. I had a flash recorder in my computer bag so I proceeded to capture the event.

The WAV file (Fig.1) can be downloaded from www. synaudcon.com/nl/nl063/pbread_noise.wav. Note that the playback system should be flat to at least 30Hz to produce the proper balance between the LF tone and the room noise. The graphs were created in EASERA™.

Figure 1 – Time domain view of the noise. The modulation rate is about 3.4Hz (EASERA).

An FFT of the wave file (Fig. 2) reveals that the modulation of the tone was produced by “beating” between two tones. When I walked around the room it was apparent that my seat (in the corner) was far worse than most other places in the room. I was not able to determine if the source was inside or outside of the building (there was heavy construction on the adjacent lot). I have not heard it before or since. The WAV file measurement isn’t calibrated (but indicates the correct relative levels), but I would guess that the level was well in excess of 100dB-unweighted ref 20uPa.

Figure 2 – Frequency domain view of the noise. The two peaks beat to produce the pulsation (the difference frequency between the two peaks).

One of the benefits of modern personal audio and video recorders is that you are more likely to have one with you when you encounter something interesting. Witness the proliferation of tornado footage on the evening news. pb 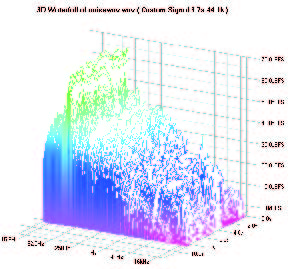