Pat Brown does a recording with TetraMic™ at the Commonwealth Stadium.  Learn more about this mic and the collected data.

There’s a lot of down time at a college football game. One must arrive early, and TV time-outs are both 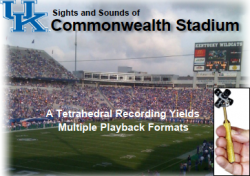 frequent and long. The geek response to this is to take some toys to the game. I decided to make some array mic recordings at the annual match-up between the University of Kentucky and Florida. The TetraMic™ produces A-Format 4-channel wave files that can be decoded later into popular formats. This allows one to make a single recording and then decide later about the playback format or microphone pattern. The files that I generated from the recordings are: 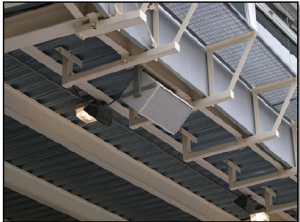 This was the primary reinforcement loudspeaker for my seating location.

5.1 Surround with Cardioids – Provides better realism than stereo due to improved horizontal imaging.

B-Format – B-Format is a stepping stone to other playback formats. Decoding this for cube playback is the best recreation of the actual experience since the 3-dimensional character of the sound field is preserved. B-Format room impulse responses (RIR) can be used to locate room reflections.

Variants on the above formats are possible, such as rotating the stereo pair to any listening angle. All first-order microphone polar patterns can be derived from from the original A-Format data or from the

Loudspeaker positions for the multi-channel playback formats produced from the TetraMic recordings.

These configurations are for the microphone, and must be played through an appropriate playback system. The figure at right shows stereo, 5.1 surround (LF not shown) and cube multi-channel systems. Stereo and 5.1 surround are well-established formats and playback systems for either are readily available. The 5.1 format provides improved horizontal imaging than stereo, with crowd noises and voices coming from behind the listener. The 5.1 file can be burned to a DVD for playback on a home theater system.

The B-Format file is decoded to eight playback channels in real time using a VST host and plug-in driving a multi-channel-audio card. The cube system must be experienced to be believed. It’s like being there, and can be worth it if you intend to measure and model rooms and want to re-create a listening experience that includes vertical imaging.

When tasked with recording an event, it is difficult to decide in advance on the format. That decision determines the required gear, setup time, and may limit what can be done with the recordings. The use of an array mic solves the problem by allowing these decisions to be postponed until after the event. pb 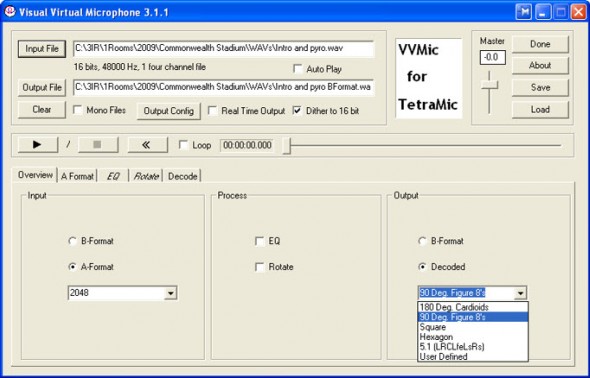 The software used to decode the A-Format wave files to the desired playback format.