In almost every AC electrical theory course, impedance matching is presented as important, or even desirable. Much is made of the “Maximum Power Transfer Theorem”. Altogether too little is said about efficiency. If we match impedances, efficiency is 50%, meaning that half the power is dissipated in the source, with only half reaching the load. There was once a common belief that “you had to match impedances for tube circuits, but not for solid-state ones”. In fact, impedance matching is almost never appropriate for audio circuits. (Matching of rated impedances, perhaps; actual impedances, no!) The output impedance of an amplifier that uses negative feedback can be either very high (for current feedback) or very low (for voltage feedback). Audio amplifiers almost always use voltage feedback; thus, even a tube power amplifier typically has an output impedance of about an ohm or less. Solid state power amplifiers typically have output impedances under 100 milli-ohms. Matching the output impedance is a great way to let the smoke out!

Then there arises the question of optimum load impedance for a power amplifier. For tube amplifiers, there were often 4 ohms, 8 ohms, and 16 ohms taps, plus perhaps a 70V tap on commercial amplifiers. These various taps were provided in order to supply the proper load for the output tubes, which was just the speaker impedance multiplied by the square of the output transformer’s primary: secondary turns ratio. This load directly controlled the gain of the output stage, and thus influenced distortion.

Solid state power amplifiers’ gain is not influenced by the load connected, if the load impedance is within the normal range. Instead, a solid state power amplifier acts as a nearly ideal AC voltage source, producing a given output voltage irrespective of the load connected. The maximum peak-to-peak output voltage equals the rail-to-rail supply voltage. Thus a power amplifier having +100 V rails can produce a maximum 200 V P-P output, which would be 625 watts into 8 ohms for a sine wave (70.7 VRMS). Built into every solid state power amplifier is an over-current protection circuit that limits the output current to a value that is safe for the output transistors. Since the current drawn depends inversely on load impedance, dropping to a 4 ohm load will double the output current and output power. The over-current protection circuit sets a limit to the available increase of output power. Thus a power amplifier may be rated at 1000 W into 8 ohms, 2000 W into 4 ohms, and 1000 W into 2 ohms. This implies a maximum output voltage of 89 VRMS, and output currents of 11.18 ARMS into 8 ohms, 22.3 ARMS into 4 ohms, and 22.3 ARMS into 2 ohms. One would conclude that the over-current protection is designed to limit output current to 22.3 ARMS. Thus a 4 ohm load would draw maximum power from this amplifier.

Now how about 70 V systems? These are designed to apply a higher voltage and lower current to the speaker lines, thus reducing power loss in the lines, since that loss is proportional to I-squared. In principle, the maximum output voltage applied to the speaker line is 70 VRMS, keeping them within the NEC definition of low-voltage circuits. Thus the actual load impedance (really, resistance) appearing at the 70V output terminals of the amplifier is given by: R=(70V)^2/P, where P is the maximum power output of the amplifier. For a 100 W amplifier, the load resistance would be 49 ohms. Note that this value of load resistance is only valid if the sum of the speaker transformer taps equals the rated power of the amplifier.

Most 70 V outputs involve output transformers built into the amplifiers, even for solid state units, although in some cases, the 70 V output is transformerless, and has a lower output power rating than for 8 ohms, 4 ohms, etc. output impedances.

The figure below shows part of a consultant-designed installation spec that one of my contractor clients asked me about. 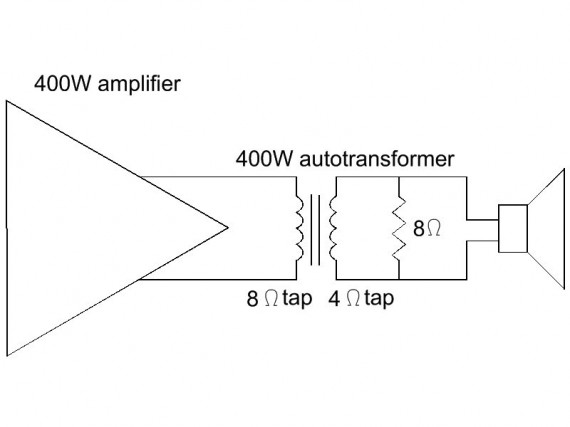 The contractor’s question was: “What is the purpose of the 8 ohm resistor?” (which, BTW, was rated at 400W). My best guess is that the consultant wanted to get maximum power out of the amplifier, so he needed a 4 ohms load, but he wanted to use an 8 ohm speaker. Certainly he could achieve this goal using the circuit he specified, but since half the power would be burned up in the resistor, and he could almost certainly have gotten 200 W from the amplifier into the 8 ohm speaker without the transformer, what’s the point? Did he need more heat in the room?

Perhaps fortunately, I do not know the consultant’s name, but the take-home result from this half-kiloword blog is that we all — consultants, contractors, technicians — need a clear understanding of the choice of load impedances for power amplifiers. rh