Download a test waveform that will help you quickly set the gain structure of your system.

This is an updated version of a previous article. After using the meter test file for a few years, I was inspired to produce another version that cuts right to the chase and allows you to both evaluate your meter type and establish an optimal system gain structure.

The new version consists of a 400 Hz sine at -20 dBFS, with an embedded sine burst at 0 dBFS (two-second duty cycle). This allows you set the gain structure of a device by establishing either the nominal or maximum playback level. Clipping can be determined from the burst, either by clip light, oscilloscope, or piezo tweeter. Nice!

The following short video shows how to use the WAV file to setup a small mixer. The file is loaded onto an NTI MRPro for playback. Remember that the piezo cannot reproduce the 400 Hz tone, only the harmonics that result from clipping. If your audio device has a VU meter, use the -20 dBFS tone to set the level. If it has a peak meter, use the 0 dBFS burst. If you are not sure, use the piezo to find the clipping point of the device.

A comprehensive treatise on audio meters could fill a bookshelf. This certainly isn’t an attempt at that. While there is much to know about any audio meter, the parameter that goes to the top of my list is ballistics. Is the meter showing me the peak level, loudness level, or something in between?

Since it can be a small research project to figure this out, I created a test waveform for quick meter evaluation. Just play it through the audio device and see how the meter responds. With this track you can quickly differentiate between VU, PPM and dBFS meters.

The waveform is shown in Figure 1 and includes 3 segments:

The pink noise and tone are the same RMS level. The peak-to-RMS ratio (crest factor) is about10 dB. The pulses nested in the tone and are +20 dB relative to the steady-state level. They are spaced to allow any meter to fully decay to the level of the tone between the pulses, which are full scale.

Figure 2 shows how some popular meter types will display this waveform. Please note that the vertical scale is in relative dB, and may be re-scaled depending on the meter type. Just pretend that you are working with a digital mixer that has selectable ballistics, but always uses the same vertical scale. This is becoming increasingly popular. Since what we are interested in are relative levels, the actual numbers are of secondary importance.

Here’s the big picture on what each meter displays:

When evaluating the metering on an audio product, I feed it this waveform and see how it responds. Be sure to turn down the amplifiers to avoid loudspeaker damage. 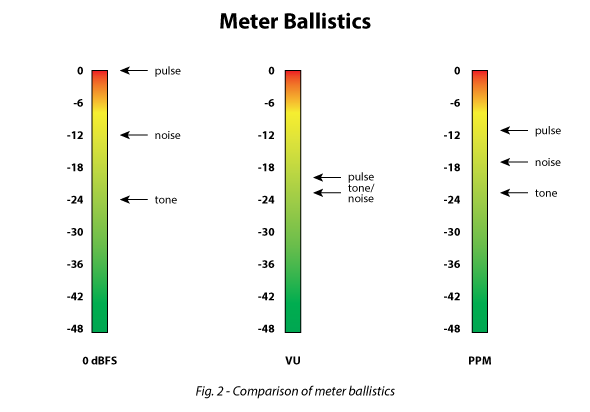 Here’s how to interpret your meter’s reading using the test track.

This video shows one of my favorite meters. The Dorrough loudness monitor displays both loudness and true peak levels. Since the pink noise and tone are the same RMS level, they produce the same indication (-20 dBFS). The pulse is displayed at +20 dB re. the noise/tone level, which has been normalized to 0 dBFS. This meter is available as hardware or as a software VST plug-in.

The whole point of metering is to allow me to know where I am operating within the dynamic range of a component. This test track lets me figure that out for each component in the signal chain, regardless of meter type. Here’s an example of using it to establish a defensible gain structure for a simple signal chain. Start with the amplifier “off.”

Of course you can measure and document the absolute levels along the way, if desired.

This ended up being much longer than originally envisioned. It’s difficult to compact a discussion of meters, since there are so many variants, caveats and related topics.

To the right, you will find the download link for the track.

Load it into your favorite media player and check the meters of every piece of audio gear that you can.   pb