There’s something fascinating about science, isn’t there?

Take the Mississippi River. There it is, this big old usually slow flowing curly-qued stream that gives every impression that it’s always been like that…running from about Minneapolis to the Gulf of Mexico and kind of just minding its own business, usually.

If you look at the records, however, you find out that the Mississippi, by trying to straighten itself out, has reduced its overall length by something like 250 miles since the start of the Revolution in 1776. That’s a little over a mile a year.

Mark Twain calculated this in about 1880 and working backwards you can see that back in the Silurian Period of lizard-history, about a million years ago, (I’d need to check with my mother-in-law) the river must have been slightly over a million miles long meaning that it would have been sticking out well past the orbit of the moon in those earlier days of Earth. Of course that also means that in only a mere 2000 years or so, New Orleans will be a fine old Canadian city which should solve their flooding problem nicely. (Pass me one o’them Moosey’s, ‘eh.)

This newsletter is about sound and how we can use it and someone has now come up with the notion that we can use sound to control weather…in particular hurricanes. 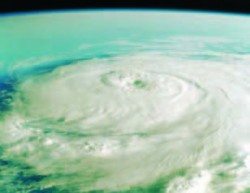 It’s interesting to note that a Class-1 hurricane, considered to be a little one, dissipates on the order of 1014 (One-hundred Terra-watts) from condensation of water vapor into rain (our old friend latent- heat, the big energy source) and about 1012 watts (One Terra-watt) from friction while rotating (the only source of energy left) and someone suggested that since a nuclear bomb puts out a huge acoustical spike (when it explodes) that if we set off a nuke in the middle of a hurricane we might disrupt its rotation acoustically and thus cause it to break up.

The little Hiroshima Bomb (20,000 tons of TNT) was estimated to have produced an acoustical overpressure pulse output of about 248 dB above the prevailing pressure, or a number really close to 1012 watts, so it seems like it might “get ‘er done” except that a third of that acoustical energy gets converted to photons as a result of cavitation and a process called sonoluminescense. Yes, it lights up. The temperatures in the cavitation zones caused by the acoustical output of the blast are suggested to reach 105 degrees for a really tiny fraction of a second. It’s one of those Dirac things, but it’s still a loss of acoustical energy. Probably enough to foul up a perfectly good wild-n-wacky idea.

At least one more drawback to this method of storm elimination would be the idea that since you’d end up with a whole lot of atomic fall-out in whatever’s left of the storm, it might not be as widely or popularly embraced as one might hope. Someone’d complain.

It’d sure be fun to try, though!