In this article, Dick helps us understand the benefits of acoustical scattering.

In 2001, I prepared a paper for the International Congress on Acoustics in Rome. I decided to use the CATT –Acoustic™ feature that allows calculating the percent total energy at a listener (receiver) projected to the three “body” planes based upon head orientation. This can be done in six separate time intervals at direct arrival as shown in Fig.2, and the data are reported in percent of total energy projected to a particular plane. If different room shapes and sizes are contemplated, then the one common denominator is mean-free-path (MFP). CATT-A calculates the MFP based upon actual ray tracing. The percent values shown for each interval in Fig. 3 are then put into a spreadsheet for plotting. Of course, the model is run twice to get the next 12 MFP transittime intervals. 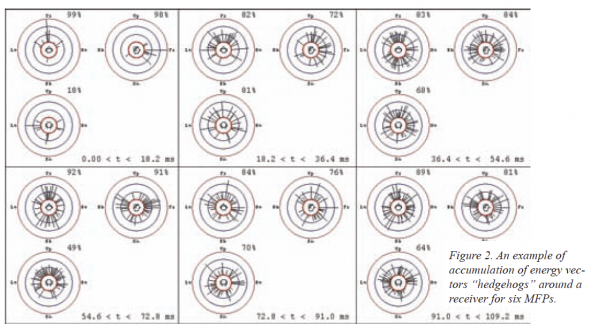 I planned to do several different rooms but time constraints forced me to present only two rectangular rooms. Unfortunately, the original files from 2001 were lost in three computer upgrades and one office move. However I recently found some images that I want to share with you. 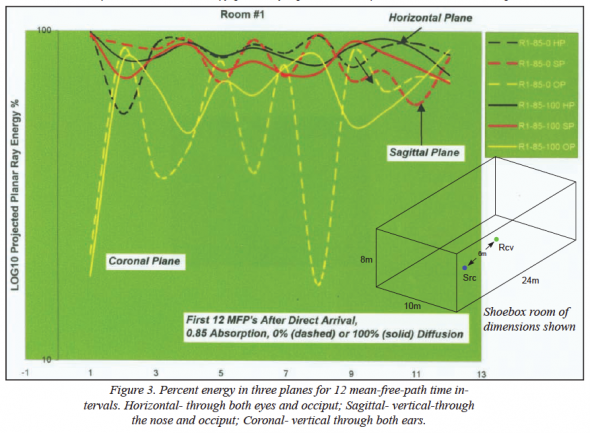 Note that the solid yellow line (coronal plane) represents 100% scattering. The dashed yellow line represents zero scattering and experiences 7-8dB variation in the 8th MFP interval. Since one MFP/c=18.2ms transit time for Room 1, this large variation appears at ~145ms into the sequence. The energy variation impinging upon this plane is mainly front-to-back: whiplash!

Since this event is well outside of the 50ms time integration window, it may or my not be audible. In my opinion it is, and it may be detectable, probably disturbing for some listeners. The energy in the first three or four MFP transit-time intervals (plus direct) is perceived as a single acoustic event—after that, room behavior counts. Scattering is truly our friend! More on this later after I rerun the CATT models. rhc