This article will help you understand what is going on within the Ethernet cables and equipment.

Us audio folks have always been careful to keep the physical transport of our audio signals under tight control. We would never ask a video, electrical, security, HVAC or computer network gal if we could use her spare cable or conduit to get audio signals around. The potential for noise and interference has previously kept these cabling systems very separate. But thinking digitally about how audio is transported is changing this – and is as scary as “sharing cable” with other low voltage technologies.
These days, many audio products send proprietary and non-proprietary digital audio over physical CAT 5 and fiber optic cables or through Ethernet network switches. Pat masterminded the figure shown here for the Digital seminar. It is a great way to think digitally about what’s going on within the Ethernet cables and equipment. 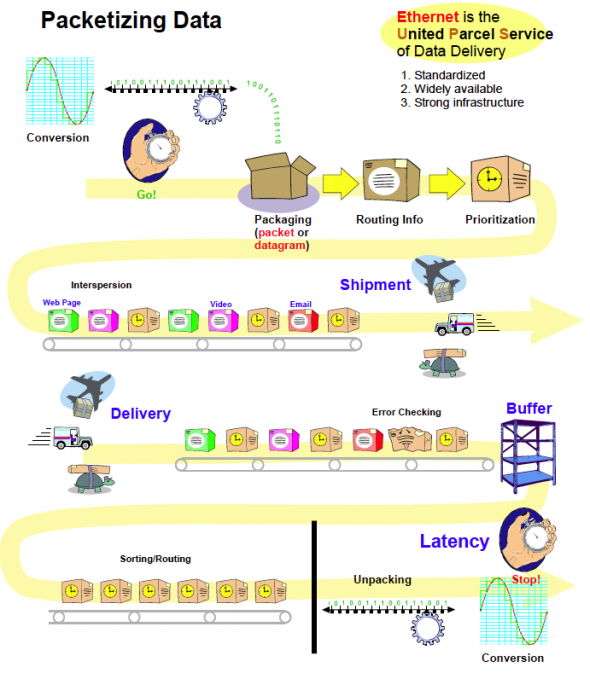 Digital audio ones and zeros are packaged in groups with source (e.g., return) address and a destination 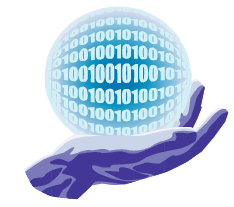 addresses – the routing information. This audio package, or audio packet in network lingo, is then sent out the audio product’s RJ-45 jack. As the packet arrives on the network proper, within an Ethernet switch, it is interspersed with many other Ethernet packets. If the audio product in question is a PC, the other packets may be email, web pages, iTunes audio, and YouTube video data. If the audio product is part of an installed system, the interspersed packets may only be AMX/Crestron or other control data to and from your favorite DSP devices.

The network devices and cables are analogous to the UPS or FedEx trucks, planes, buildings and roads where all kinds of packages containing infinitely varying things are interspersed and sorted using their destination addresses. The UPS people and systems route the packages to their destination, yet neither the sender or receiver know or care about the exact path their packages take to arrive. They’ve come to trust the UPS network to deliver. If they don’t, someone – the receiver or UPS – eventually informs the sender that a delivery problem has occurred.

This delivery acknowledgment is the error checking idea offered by some Ethernet streaming protocols where the sender resends data that has not arrived for whatever reason.

If your audio requires real-time delivery, streaming is not for you. The delivery speed of UPS packages depends on your package’s need (and bank account balance). Delivery prioritization of network audio data also varies.

If your audio is streaming – say, along with a YouTube video – and therefore non-critical, buffers are used at the receive end to temporarily store the audio until enough has been received to begin listening. In the early days of Internet streaming, dropouts were common when the buffer size used by the algorithm involved was insufficient for the assumed delivery speed. Luckily both delivery speed and more efficient streaming protocols have reduced dropouts.

If your audio delivery requires close to real-time delivery, many designers use digital audio networks that are physically independent from those that carry computer network data, which removes prioritization as an issue since the network exists only for audio transport, plus an almost negligible trickle of control data.

Assuming no network delivery errors have occurred, packets arrive at the RJ-45 jacks of their destination (street and house). Some protocols use the IP address for delivery, others like CobraNet’s audio packet delivery use the MAC address instead. Aviom’s A-Net products offer Aviom-specific Ethernet hardware, since their protocol cannot use off-the-shelf Ethernet hardware. Aviom has their own “UPS” system that takes advantage of the inexpensive “roads” that CAT 5 cable provides – a major advantage since you know what you’re getting works; plug it in, play.

While it is more common these days that dedicated audio networks are used such that computer-oriented packets are avoided altogether in the audio system, it’s technically possible but not Networking 101, to have your audio commune with all manner of Ethernet data without worry.