This article addresses shield current induced noise caused by the imbalance in the magnetic coupling between the shield and the two signal conductors.

My last two columns have focused on pin 1 problems as an open door for RF into audio equipment. But RF can also enter equipment on the signal conductor(s) if the equipment fails to block it with an effective low pass filter. RF is induced on a shielded balanced pair by at least three mechanisms:

In this installment, we’ll focus on the first of those mechanisms.

For the same 1994 paper that introduced us to the “pin 1 problem,” subsequently published in the June 1995 issue of the Journal of the AES, Neil Muncy set up an experiment to study what happens when current flows on the shield of audio cable. With a power amplifier and output transformer driving the shield of audio cable with 100 mA sine and square waves at 60 Hz, 600 Hz, and 6 kHz, he measured the voltage induced on the signal pair. He called this voltage “shield-current-induced noise” (SCIN), noting that its amplitude was proportional to frequency and that it was due to the imbalance in magnetic coupling between the shield and the two signal conductors. He measured cables with a variety of shield constructions, and observed that cables with certain types of shield construction had much greater SCIN than others.

On the basis of Neil’s work, I had long suspected that SCIN was a major contributor to AM broadcast interference to audio equipment. Last year, I undertook research to prove it. I reported on that research at the Amsterdam AES this spring.

My experimental setup had to be different from Neil’s, because I wanted to measure SCIN from 10 kHz at least 2 MHz (I eventually went to 4 MHz with that setup), and it’s hard to get more than about 100 kHz through even the best audio transformers. (I have recently devised another experiment showing that SCIN is alive and well to at least 300 MHz, and will report on it at the AES in NY in October). 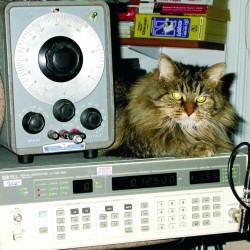 Fig-2 The HP200CD audio generator was used for most data below 250kHz; The HP8657A at the higher frequencies.

For the 4 MHz tests, I drove the shield of the test cable end-to-end using a 50 ohm RF generator, and measured the current by connecting an RF voltmeter across a 2.5 ohm resistor in series with the shield. Neil used a constant current of 100 ma, which he considered representative of what often flows in the shield of audio cable. He could easily produce that current and hold it constant with the power amplifier. The RF generator is capable of a lot less current, especially when driving the inductance of a long cable, and the available current varies widely with frequency and the length of the cable because the generator is a much higher impedance source. To get more current between 10 kHz and about 250 kHz (increasing the sensitivity of the measurement), I used an old vacuum-tube Hewlett Packard audio generator. I also knew that wavelength effects and resonance in the cable would introduce errors, so I measured four lengths of cable–125ft, 50ft, 25ft,and 10ft. Figures 1 and 2 show the test setup. 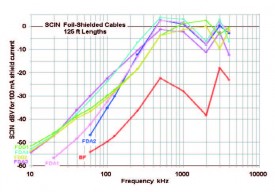 Fig 3 shows that all the foil/drain cables perform similarly, with the exception of FDA1 and FDA2, 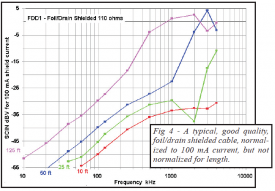 which had markedly less SCIN. But cable BF, a low cost foil/ braid-shielded cable with no drain wire, custom manufactured in Brazil for Dave Distler at the suggestion of Ray Rayburn, had far superior SCIN performance.

In fact, Fig 8 and 9 show that the SCIN of BF was on a par with BA, a premium braid-shielded cable!

The data for SCIN in cables is significantly more complex than is obvious in Fig 5, which shows data taken in increments of one octave. The more closely spaced data points of Fig 6 clearly show multiple resonance and wavelength effects, but the noise is 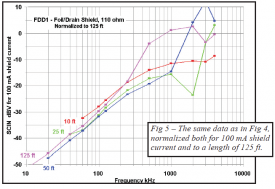 clearly increasing linearly with frequency below 500 kHz. Bill Whitlock has shown that the first peak, around 700 kHz for this cable and this length, is the resonance between the series inductance of the shield and the cable’s capacitance. Some of the other peaks and dips are related to the wavelength of the cable based on its behavior as a transmission line. All of these effects will scale with the length of the cable. That is, short cables will exhibit a linear increase of SCIN to a higher frequency, and resonances will move higher in frequency. 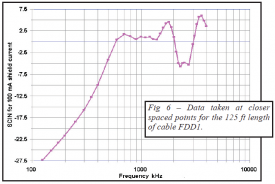 radio frequency voltage and current are present. The result is that the cable will show resonance effects based on its length. The cable lengths tested here exhibited multiple transmission line-related resonances, and, as we’ll learn in the next newsletter, they will be particularly effective as receiving antennas for at those resonant frequencies. See the ARRL Handbook and ARRL Antenna Book to learn about transmission lines.

All of the cables shown in Fig 8 and 9 are designed for portable use (except for FDA3, shown for comparison). BA is a popular, high quality, braid-shielded cable, SA an excellent European cable with a double 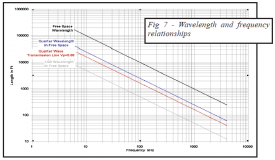 spiral shield. BDAM is a high quality miniature analog cable that is a single pair of a family of snakes, and is approximately the same size as FDA3 and FDD1. Types BA, SA, and FDA3 were also measured by Muncy.

When studying the data, it helps to think about what potential interference (noise) sources are typically present in any given part of the spectrum. The standard AM broadcast band extends from 540 – 1,700 kHz 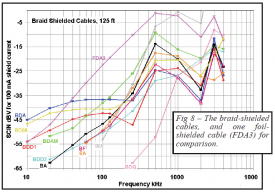 throughout most of the world; there are also broadcast, business, and scientific users of the spectrum between 50 kHz and 500 kHz. In addition, the spectrum between about 10 kHz and 1 MHz is full of noise from motors, lighting equipment, switching power supplies, control signals for clock systems, etc. Harmonics of power-related distortion and switching transients are also present.

Fig 10 shows a typical power line noise spectrum. Filter capacitors will couple all of the noise onto the ground, which in sets up noise current in the shield of audio cables running between widely separated points. SCIN will couple this noise onto the signal pair! 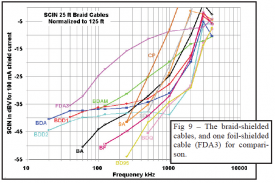 In the next newsletter, we’ll talk more about the practical implications of this research and report on more of it. But for now, here are some important conclusions that can be drawn from a study of the data.