Sound System Designers site surveys should include the Acoustical environment, Ambient noise and radio frequency survey.  Learn why these are so important.

Site surveys are a necessary part of all construction trades. The ground must be firm enough to support the building. The water must drain properly. There must be adequate ingress and egress. The list goes on.

Sound system designers should also perform a site survey of the auditorium to determine the conditions in which the new sound system must operate. There are a multitude of parameters that can be measured in a building, but it won’t be possible, practical or even necessary to measure the majority of them. As the list of essential measurements is trimmed, there remain three items that should always be addressed when sizing up a room for a sound system. Two of them require acoustical measurements and one requires an electromagnetic measurement.

There are several acoustical parameters that must be known about the room. These can be gathered with two measurements. An impulse response can answer the following questions:

The impulse response is usually plotted on a posi- tive decibel vertical scale (log-squared response) or displayed as an energy-time curve (ETC). This makes it easier to interpret relevant to the human listener.

The time span of room decay gathered during the impulse response measurement should be longer than the time required for the stimulus to fully decay into the room’s noise floor (Figure 1). This can range from less than one second to several seconds. At least one second is recommended as a minimum, as this will allow a frequency resolution of about 1 Hz to be observed in the frequency domain. It’s always better to gather too long a time record than too short a time record.

A room can be “live” but not be reverberant (Figure 2). In reverberant spaces, the time response will have a dense “tail” that decays over time (Figure 3). The reverberant tail will be similar from point-to-point in the space (it’s a statistical room parameter), so a single impulse response measurement can characterize the entire space to the accuracy needed at the design stage. I like to pick a spot away from room boundaries but not exactly in the center of the room.

The purpose of this initial impulse response is to evaluate the late decay characteristics of the space. There’s probably no point in trying to analyze specific reflections at this time. These will vary dramatically with loudspeaker placement and aiming, as well as seating position and can be minimized by good design practice. It may be necessary to evaluate them after the loudspeakers have been selected and installed to determine if and where room treatment is justified. An acoustically large space is one in which the wavelengths of the sound waves are small relative to the spacing between surfaces. This is true of most rooms at high frequencies. As frequency decreases, a different type of acoustical behavior occurs. The region of transition between large and small room behavior (critical frequency) can be revealed by the impulse response.

When the impulse response is viewed in the frequency domain, the modal density of the space is easily observed. On a log scale, modes are always widely spaced at low frequencies, with increasing density as frequency increases. The objective is to observe the region in which the modes become sufficiently dense to overlap and produce a smoother response. Figure 4 shows the impulse response of a 1200 seat auditorium after having been transformed to the frequency domain via the Fast Fourier transform – a feature found on many audio analyzers. Note that the modes get pretty dense by 100 Hz. This means that they are unlikely to produce significant coloration in the vocal range, but could significantly affect the sound of a subwoofer or an organ pedal note. In a smaller space, this transition region shifts up in frequency and more of the spectrum can be adversely affected by room modes. Good room geometry is the first line of defense against poor low frequency performance. Treatment is necessary in severe cases – a good time to bring in an acoustical consultant. 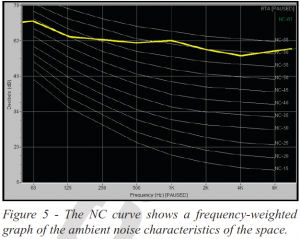 Noisy auditoriums produce a number of problems for sound reinforcement. Noise forces the system to be operated at excessive levels, which reduces its stability and forces close-miking of sound sources. The main offenders regarding noise are usually the HVAC system (heating and air conditioning) and traffic noise. A noise criteria (NC) measurement can show the designer what they are up against. The noise survey should be done at a number of seating positions and the system designed around the worst one. If the noise is excessive (more than NC 40 for an auditorium) steps should be taken to control it. This is another good time to bring in a specialist. We recently held a seminar in a meeting space that was NC 61 – a real problem for listeners. Figure 5 shows a noise criteria survey at a rear seating position in the space.

Here’s one that is often overlooked. The proliferation of wireless products in the audio marketplace makes a radio frequency survey of the site a useful endeavor. The number of wireless products used in an auditorium tends to escalate with time. The customer starts out with a few wireless lapel mics. The next musical production requires a few more. Eventually the band wants wireless in-ear monitors and so on. An initial survey of the space will reveal information about the best frequency band to use (VHF or UHF) and how high the quality will need to be (closer spacing of frequencies requires higher quality transmitters and receivers). The survey can also reveal the optimum placement of receivers – whether they can be at the mix position or must be on stage.

Figure 6 shows a spectrum analysis of the FM radio band in a house-of-worship. This plot will be an invaluable aid to a wireless manufacturer in developing a wireless strategy for the space that doesn’t require the continual replacement of existing components to allow more channels, closer spacing, etc. A similar study of the UHF band can reveal which one has more available bandwidth that can be used for wireless devices.

A knowledge of the decay characteristics of the space is essential to selecting and placing the appropriate loudspeaker system(s). The impulse response in its various forms describe these characteristics. The modal response can reveal problem frequencies for a particular space and can aid in the placement of front-of-house equipment as well as reveal the need for room treatment. A noise survey reveals how much acoustic gain must be designed into the system, and can reveal excessively noisy sources that should be corrected. A radio frequency survey is invaluable for establishing a long-term strategy for the implementation of wireless devices in the space.

The ability to perform and interpret a survey of this type is the mark of a true audio professional. The required time is rewarded by better working designs and a good reputation. A number of instrumentation platforms exist that are cost-effective and widely available. They include PC-controlled dedicated instruments, hand-held instruments and software applications. Customer confidence increases as less money is wasted on inappropriate equipment for the venue. Site surveys are a major step in standardizing and formalizing system design practices. pb

Ten Reasons Why Church Sound Systems Cost More
Roll your own acoustic source for STI testing
Collecting Binaural Data for Recordings - Accuracy vs Realism
The Floor-Bounce-Effect - Mic Placement for Equalization
How to extract an impulse response from a recorded sweep?
Acoustic Environments