Tips and Tricks by Rick Chinn

Connecting computers into audio systems is one of those things that we are called upon to do more and more often these days. The obvious solution uses a cable with a mini-TRS on one end and a pair of RCA plugs on the other. One of the RCAs is tied to the tip/sleeve pair and the other RCA is tied to the ring/sleeve pair. Unless you’re unusually lucky, this setup usually hums. Why?

Because the chassis ground in the computer goes directly to the AC line’s safety ground (as it should), and there is also a bunch of stuff in the computer that generates noise; tons of it. These two things combine with the unbalanced interface to the mixer to produce a ground loop and a classic case of Shield Current Induced Noise, or SCIN.

Most mixers made today have balanced line-level inputs. If you use them with a pair of RCA > 1⁄4” TS adaptors (like the Switchcraft 345A), you’re throwing away the benefits of having a balanced input. You can avoid this by making a special cable that uses the mixer’s balanced input to eliminate the SCIN-caused hum. You do this using a connection technique called forward referencing.

Here’s what you need to do:

Let’s say that the mixer uses TRS jacks for its line inputs. Note that if the line inputs aren’t balanced, you should just use an isolation transformer. The laptop

Now although it looks like the sleeve of the 3.5 mm plug is tied to both the ring and sleeve at the 1/4” end (and if you’re an ohmmeter, it is), it isn’t from the standpoint of the balanced input. 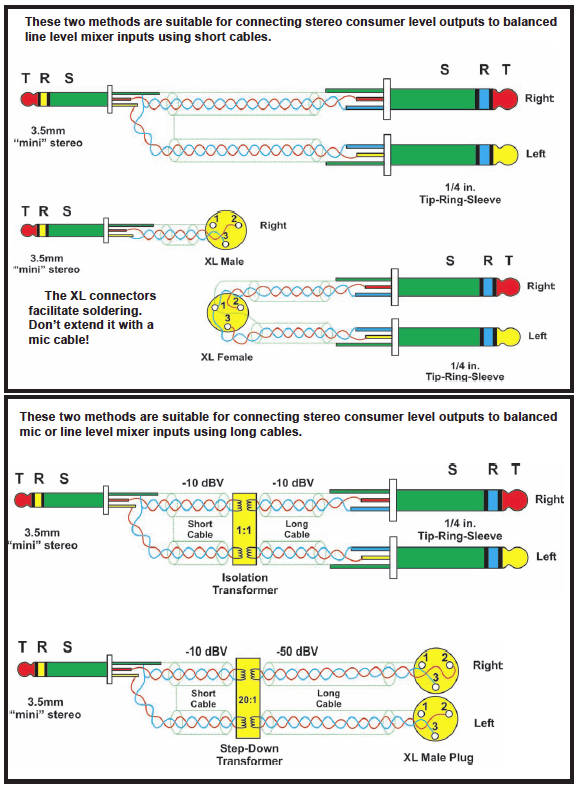 Now I’ll grant you that a 3.5 mm plug doesn’t give you much room to work in, so here’s a workaround. Make an adaptor that takes that 3.5 mm plug to an XL3- M. Don’t make it more than a foot long. Now make another cable that goes from an XL3-F to two 1/4” TRS plugs. Wire it as described above. Resist the temptation to make this cable longer by inserting a mike cable between the two XLs. If you want to make this 1-D-10- T proof, use something other than an XL3 (like an XL4 or XL5), then they (hopefully) won’t be able to find a cable to extend it.

I use this method at my office to connect two PCs (and a bunch of other stuff) into a Mackie 1202. It’s quiet, and it doesn’t hum.

If you’re trying to do this when the mixer is a distance from the computer, you’ll be better off using an isolation transformer to balance the source and break the SCIN loop. My personal preference is to use a passive direct box (20:1 stepdown) to convert the signal to mic level. This works better in hotels, etc. because the inputs in the walls are nearly universally mic level and making the signal levels more like a microphone helps reduce or eliminate crosstalk between cable pairs caused by gross level differences. The ground lift switch on a transformer isolated DI box is your friend.

When I’m out in the field, I often use a home made box that has two passive DI boxes built into it. Whirlwind now makes something called the PC-DI that does the same thing. Very handy. rc

Rick Chinn is the owner of Uneeda Audio, a systems design and consulting firm. He is also a live sound mixer and has worked for most of the audio companies in the Seattle area in one capacity or another.