Beyond Audio – By Brenda Brown

Learn more about the audio and acoustics of this amazing architectural structure known as the Scottish Rite Cathedral.

The Sound Reinforcement for Designers had the privilege of touring the Scottish Rite Cathedral located in downtown Indianapolis, IN. This amazing architectural structure is devoted to the exclusive use of Scottish Rite Freemasonry. Many of the rooms and structures are designed around the number 33 commemorating the 33 years in which Christ lived on earth. The building was completed in 1929 just before the great depression, at a price tag of over $2.5 million dollars. Today it is insured for $100 million dollars. 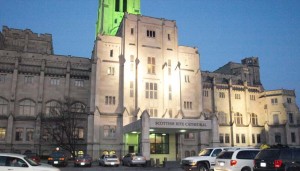 Exterior of the Scottish Rite Cathedral

Every room was beautiful and interesting, but the 1100 seat theater is what caught the attention of our group. From the photos, we all were expecting a reverberant room. It is 99 feet wide, 45 feet high, and 175 feet from the rear of the stage to the back of the fourth floor balcony. The ceiling is arched and beautifully hand painted with richly carved curly Russian white oak trusses. The walls were paneled with the same wood. To all of our amazement, the acoustics in the room were quite controlled. The ceiling between the trusses was not a hard surface but a type of animal skin. Above the material was an open space that housed pipes for the organ. Our expected 4+ second RT was just over 1 second! We went “loaded for bear” with a large format horn to test, but ended up using a much lower directivity loudspeaker for the measurements. 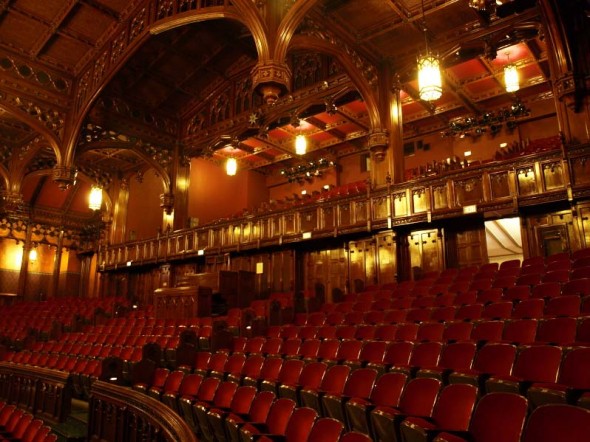 Interior of the main auditorium

ESCO Communications designed and installed the sound System for the auditorium. Mark Fritz and Jason 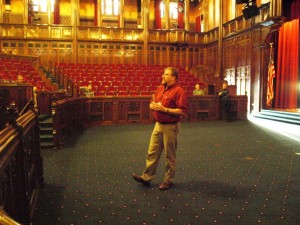 Wright from ESCO were in the class. Pat gathered some impulse responses (available on-line) to document the acoustics of the space.

Our deepest respect goes to George F. Schreiber, the Indianapolis architect whose design for this building went far beyond appearance.

A special thanks to Bill Woodruff from Scottish Rite and Mark Fritz from ESCO Communications for arranging this tour. bb

The measurements from the Scottish Rite are Project 27th on the SAC IR Exchange.

Collecting Binaural Data for Recordings - Accuracy vs Realism
How to extract an impulse response from a recorded sweep?
Real-World Reverberation - PureVerb™
Large Room Acoustics
Polarity 101 - Some subtleties regarding device polarity
A Do-it-Yourself Guide to Computing the Speech Transmission Index