There have been some threads on the SynAudCon Email Discussion List regarding sources for room impulse response (RIR) testing. I recently had the opportunity to compare some source types in a reverberant space under fairly controlled conditions.

Overview St. Michael’s of Cannelton is a medium-sized Catholic church (approximately 300 seats) located along the Ohio River in southern Indiana. A recent remodeling project replaced the carpet with tile, and the reverberation time (RT) predictably increased, rendering the existing sound system unintelligible. The objective of the session was to measure the RIR to quantify the new RT for use in redesigning the sound system. The designer/installer is Buddy Ward of Jasper, IN. Four sound sources were used for room testing. These included balloon pops (mechanical), Outline GlobeSource™ (“omni” electro-acoustic), NTI Talkbox™ (“speech-like” electro-acoustic), and a Frazier CAT 2X7™ (small format line array). 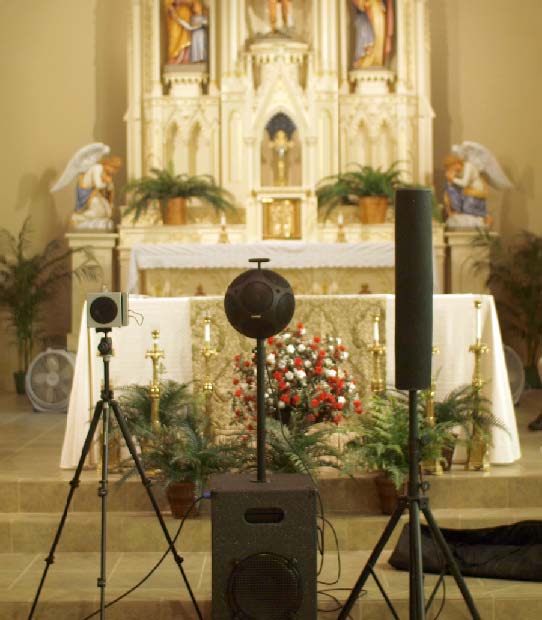 The line-up of electro-acoustic sources

Two test distances were used 6m and 12m. This allows the relationship between directivity, distance and direct-to-reverberant ratio to be observed.

The NTI Talkbox was used stand-alone. A subwoofer was used with the omni and line array for extended LF response. The test stimulus for all loudspeakers was a 14-second log sine sweep. The sweep was recorded using a TetraMic™ and 4-channel wave recorder. The resultant A-format sweep files were converted to B-Format using the TetraMic software utility, and then convolved with the inverse-sweep in GratisVolver™ to yield the B-Format RIR. The “W” channel (Ch1 of the WAV file) was post-processed to yield the desired acoustic measures.

Perhaps the oldest method of RIR collection involves the use of an impulsive source. To implement this method I secured a bag of balloons from the local Hobby Lobby. The balloons were held overhead at the loudspeaker location and popped with a sharp instrument. After trying a few I found that “the more air, the better” and inflated the balloons to near their limit. The room was made as quiet as possible, with all air handlers turned “off.” The windows were open, but I waited for cars to pass before popping the balloon. While it is possible to convolve the balloon pops with dry program material and listen, there is no connection to reality. The convolutions sound a bit strange, but are representative of how a low-directivity source would excite the room.

The “omni” electro-acoustic source is a 12-loudspeaker array (Outline GlobeSource). It is spherical in shape and technically not a dodecahedron. The transducer size and spacing prevents it from being a true omni at high frequencies, a malady shared by all such devices. The GlobeSource has very high power handling, so very loud sweeps can be played for good signal-to-noise ratio.

The NTI Talkbox is a self-contained powered loudspeaker/DSP/file player combination. The log sweep was loaded onto its compact flash card for playback. It uses on–board FIR filtering to produce an essentially flat transfer function (both magnitude and phase) from 100Hz to 10kHz. The price paid is high latency (~60ms), and some low level “pre-arrivals” on the impulse response. Neither is a negative factor for its intended use. The convolutions performed with the RIRs sound much more natural than the omni source, and are therefore more representative of what the room would sound like when excited by an unreinforced talker. This allows the effect of increased directivity to be readily assessed in the room modeling software. The Talkbox has a maximum LP = 70dB @ 1m, Line Array Source so a quiet room is required when used for RIR testing. 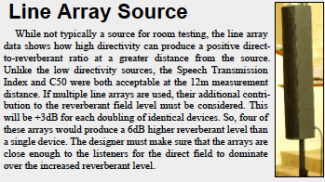 Line arrays are not normally used for room testing, since their high directivity can prevent them from uniformly exciting the space. The designer on this project is considering the use of this device, so it made perfect sense to collect some data from it. This is a two-way loudspeaker, with a HF line element coaxially mounted to extend the response of the LF section. The horizontal coverage is very wide (>100deg) and the vertical much more narrow (~30deg above 500Hz). The direct field dominated the reverberant much farther into the room, and the reverb times were slightly shorter than those produced by the low directivity sources. It is important to note that this is due to the reduced room excitation, not a change in the room’s reverb time. 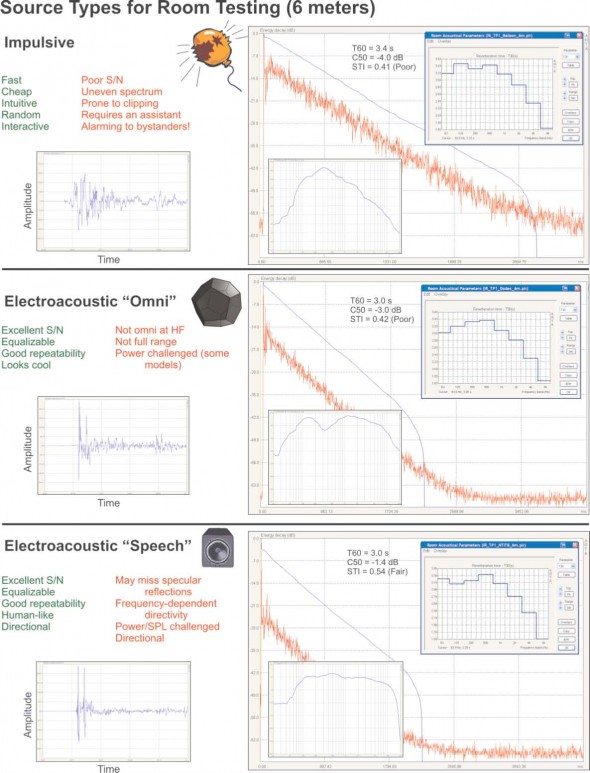 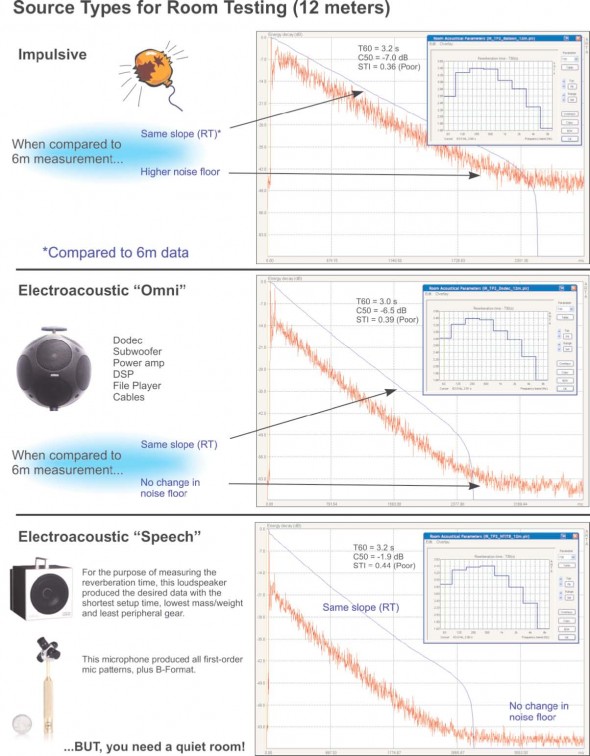 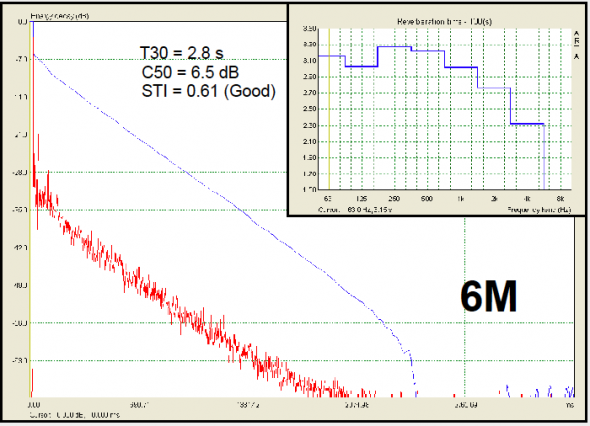 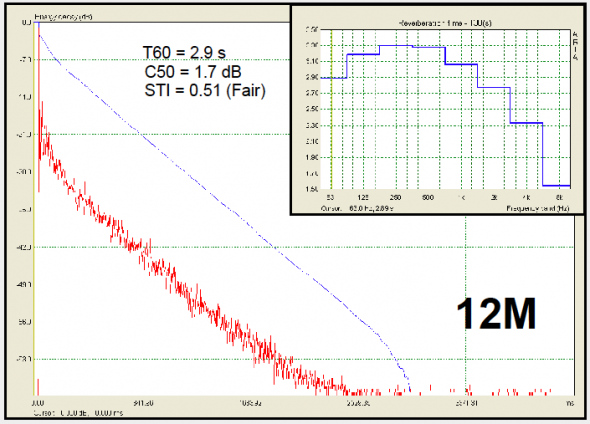 If the sole objective of this exercise were to measure the room’s reverberation time, then any of the sources used would have sufficed. The balloon pops are okay for RT testing, but not much else. Both omni sources have the advantage of producing a more uniform room excitation, and would also better stimulate reflective surfaces around the source, such as a band shell or other reflector. The speech-like source produces an RIR that is more consistent with how the room would sound with an orator an important piece of information. It also comes close to providing room data for all of the “predictable” octave bands (125Hz – 8kHz). It was by far the easiest source to cart into the space and setup, since no supporting equipment is needed. The battery option even negates the need for an electrical outlet. The line array data is the best for demonstrating the possible improvement in performance of a renovated system, but if it is used for RT testing the microphone should be moved beyond critical distance, or at least off-axis from the source. pb

Ten Reasons Why Church Sound Systems Cost More
Roll your own acoustic source for STI testing
Collecting Binaural Data for Recordings - Accuracy vs Realism
How Do Boundaries Affect Loudspeakers?
How to extract an impulse response from a recorded sweep?
Acoustic Environments