This paper intends to show how a simple error in power wiring geometry inside the conduit can create a transformer which induces voltage on the ground wire. This can ruin an otherwise well designed technical power and ground system.

Clean power and ground is an important part of any technical system. Signals generally need to be transported from one area to another. Any difference in the ground reference voltage between two locations will be added to the signal. Balanced interfaces can cancel out these ground differences, but there can still be problems. Cancellation can be incomplete, leaving some amount of ground difference noise. In many cases the noise voltage that is canceled out subtracts from the available signal headroom. In extreme cases significant current can flow through the small gauge signal ground wires, creating Shield Current Induced Noise (SCIN) if the signal cable has this vulnerability. Inherently unbalanced interfaces, such as analog video are particularly vulnerable to ground noise.

This paper intends to show how a simple error in power wiring geometry inside the conduit can create a transformer which induces voltage on the ground wire. This can ruin an otherwise well designed technical power and ground system.

When two conductors carrying current of the same magnitude but flowing in opposite directions are in close proximity, their fields repel each other, which distorts both fields. This concentrates magnetic flux in the area between them and reduces the field intensity at a distance. A conductor exactly halfway between the two is approached by equal fields from both sides which are additive. However since each line of flux which crosses the center conductor has a twin from the other side crossing it in the opposite direction there is no net voltage generation. This causes some confusion, because although the conductor goes right through the area of highest flux concentration, it does not have a voltage induced onto it. This conductor must be very precisely centered, however the principle holds true for any position equal distance from each current carrying conductor.

In a typical power circuit a third wire is added to serve as a safety ground. This wire may also serve as the ground reference for equipment it is powering. This wire normally should not be carrying any current and should not be generating a magnetic field of its own. However as a conductor it can have a voltage induced onto it by magnetic fields it may encounter along the way.

The NEC and other electrical codes require the ground wire to be run the same route as the power wires for the circuit it is serving. This means it will be in close proximity to the current-carrying, magnetic-field-producing power conductors. If, by a matter of its physical location, it is closer to one current carrying conductor than the other, then it will have a voltage induced upon it. The voltage induced onto the ground wire is added to the ground reference at the source panel to become the ground voltage at the load end of the circuit. It creates the ground voltage difference we are trying to avoid.

There are two ways to keep the voltage induced onto the ground wire to a minimum. 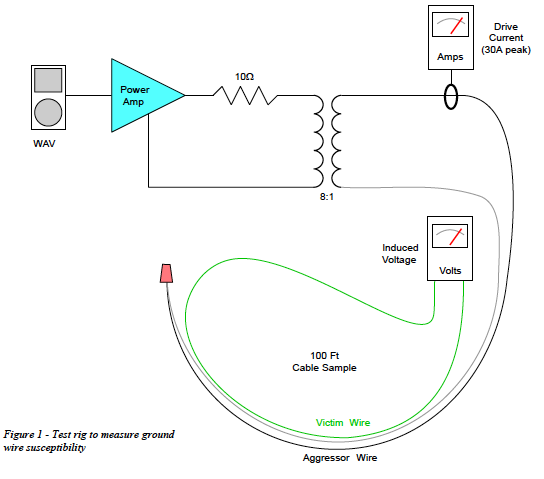 The test setup (Figure 1) was designed to drive an AC current into the power pair of a sample cable and measure the voltage generated on it’s ground wire. A 900 Watt @ 8 Ohm audio amplifier was connected through a 10 Ohm resistor to a large transformer scavenged from a UPS, which stepped voltage down and current up by 8:1. This rig is able to drive over 30 amps into the shorted loop of the wire sample in constant current mode with flat response to 2000 Hz. A clamp-on inductive pickup with verified flat response over the audio range was used to measure the actual loop current in peak and RMS amps and to monitor the waveform.

Test signals included a 61 Hz sine wave and a 61 Hz 10% bipolar pulse. 61 Hz was chosen so that any interference with local 60 Hz power or fields would show up as a 1 Hz modulation. It was only seen if the amplifier was driven to clipping. The 10% bipolar pulse is similar to a square wave except the positive and negative “on” times were 10% of their respective half-cycles, with the remaining time at zero amplitude. This signal simulates the current waveform of electronic loads, which only draw current at the peak of the voltage waveform. This signal has a 3.16:1 peak-to-RMS voltage ratio and has harmonics of roughly equal amplitude to the fundamental out to about 500 Hz, after which it rolls off at about 3-4 dB/octave. This is a very familiar sounding buzz. A 10-second sample can be downloaded from here.

These signals were sent, at 20 amps RMS for the sine wave and 30 Amps peak, about 9 amps RMS, for the pulse, through the sample cables. The current loop consisted of the “hot” wire, which was shorted to the “neutral” wire at the far end, which returned the current to the starting point. The “ground” wire which traveled along with the current loop picked up more or less voltage along the way. This voltage was measured, both peak and RMS. See figure [test setup]

Test samples of cable were all 100 feet long and included the following: -Flat 12/2 Romex which is normally used in US residential wiring. It has two insulated current carrying conductors inside an oval shaped plastic sheath with a bare ground wire between them held loosely in place with paper fillers. Typically the ground is one gauge smaller than the current conductors. 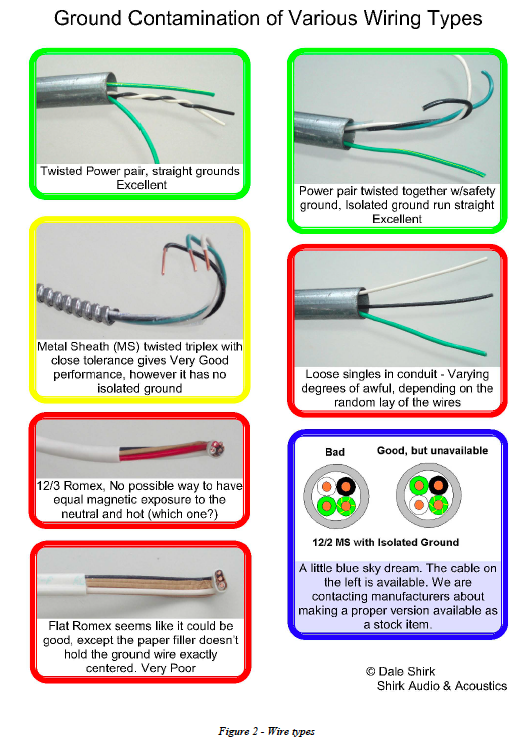 The results of these tests showed a staggering difference of over 2000:1 (66 dB) between the best and the worst. The best performers were those with the hot and neutral twisted together and the ground run separately in the same conduit, but not a part of the twist. Even with a peak current of 30 Amps at mid range audio frequencies through the current loop, the ground only picked up from 1 to 3 mV peak, depending on which combination of wires was tested.

Close second was the MS cable with the 3 conductors twisted together. Apparently this construction offers close enough tolerance that the ground has equal exposure to both the hot and neutral, thereby balancing it out. Using the same 30 Amp pulse signal this wire picked up a noise of 7 mV peak. The real surprise was the Romex cable. Even though the ground is between the two current carrying conductors, apparently the paper spacers don’t do a very good job of keeping it centered. With the 30 Amp pulse test it generated 433 mV peak of noise on the ground wire. I also tried making some bends both across the flat dimension and across the edge, and these had little effect on the measurement.

Lastly the loose singles in conduit showed the worst performance. The results varied widely depending on which pair was used for the aggressors and which wire was measured as the victim. The worst had over 2 peak Volts of noise. On a typical balanced line audio interface with an active input this would cost several dB of headroom and require stellar CMRR to cancel it out. The RMS value of the ground noise was about -10 dBu. You do the math.

How does this apply to our Technical Power System spec? At this point the only acceptable option for both isolated ground and low induced voltage onto the ground wire is to specify twisting of the hot and neutral together inside the conduit. The safety ground, which only grounds junction boxes and outlet boxes along the way, may be a part of the twist or not.

For residential work or in areas where all-wood construction is permissible, a smaller tech power system could be wired with MS in such a way that it ends up being effectively Isolated Ground. This is because the outlet boxes and junction boxes, being mounted to wood do not have any connection to any other grounded object. Care would need to be taken in running the MS cable to not let it touch any otherwise grounded objects along the way. Ordinary (non-IG) outlet devices would be used.

Lastly, it’s important that our Technical Ground wires not be contaminated by magnetic leakage from any other circuits. Perhaps the most common culprit here occurs in remodeling work when there is limited access for wiring in the existing parts of the building. It’s very common for a large chase to be installed, for instance a 3 or 4 inch conduit from the basement to the attic, which carries many circuits for lots of electrical loads. If your Technical Ground wire must go through there, then each circuit in that conduit must have it’s hot(s) and neutral twisted together, a battle you will surely lose in the field. Find a different route for your circuits.

I wish to thank Bill Whitlock and Neil Muncy for their roles in bringing this issue to my attention and to the industry as a whole. Both men reviewed this article and offered helpful suggestions. I also wish to thank Dr. Eugene Patronis for helping to clarify in my mind the physical processes behind these measurements. ds