Impedance Measurement – Here are some methods and caveats in characterizing the load seen by the amplifier.

It should be understood that since the voltage, E and the current, I, are complex quantities the impedance, Z, is also complex. That is to say impedance has a magnitude and an angle associated with it.

When measuring loudspeaker input impedance it is common today for many measurements to be made at relatively low drive levels. This is necessitated because of the method employed in the schematic of Figure 1. In this setup a relatively high value resistor, say 1kW, is used for RS. As seen from the input of the DUT, it is being driven by a high impedance constant current source. Had it been connected directly to the amplifier/measurement system output it would in all likelihood be driven by a low impedance constant voltage source. In both of these cases constant refers to there being no change in the driving quantity (either voltage or current) as a function of frequency or load.

When RS is much larger than the impedance of the DUT, the current in the circuit is determined only by RS. If the voltage at the output of the amplifier, VO, is known this current is easily calculated with the following equation and is constant.

Now that we know the current flowing in the circuit all we need to do is measure the voltage across the DUT and we can calculate its input impedance.

There is nothing wrong with this method. It is limited, as previously mentioned however, in that the drive level exciting the DUT will not be very large due to the large value of RS. For some applications this may be problematic. Loudspeakers are seldom used at the low drive levels to which we are limited using the above method. It may be advantageous to be able to measure the input impedance at drive levels closer to those used in actual operation.

If the current in the circuit can be measured rather than having to be assumed constant this limitation can be avoided. Using a measurement system with at least two inputs, as shown in Figure 2, can do just that. In this case RS is made relatively small, say 1W or less. This is called a current sensing resistor. It may also be referred to as a current shunt. Technically this is incorrect for this application as a current shunt is always in parallel with a component from which the current is diverted. The voltage drop across RS is measured by input #2 of the measurement system. The current in the circuit is then calculated using the equation

The voltage across the DUT is measured by input #1 of the measurement system. We now know both the voltage across and the current flowing into the DUT so its input impedance can be calculated.

All we have to do it multiply our dual-channel FFT measurement by the value of RS used and we get the correct value for impedance. If RS is chosen to be 1.0W this becomes really easy.

In EASERA there is not an Ohm display selection. Selecting a Volt display will yield the correct values for the displayed curve. For other measurement systems this may work as well, but it is recommended to check the display by measuring a known resistor value for proper calibration.

the VI BoxTM from LinearX (Photo 1). The signal from the amplifier is routed through the VI Box, which contains the current sensing resistor, 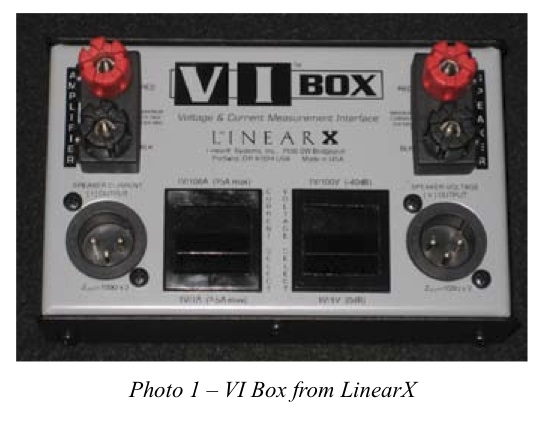 and then on to the DUT. It actually contains two selectable sensing resistors, 1 ohm and 10 mW, which allow for measurements using a greater range of current supplied to the load (DUT). The voltage across the selected resistor is present across pins 2 and 3 of one of the XL connectors. The voltage across the DUT is present across pins 2 and 3 of the other XL connector. These connectors allow for quick and easy interface with balanced inputs of a computer/audio interface (sound card). There is also a selectable voltage divider so the input of the audio interface won’t be over- loaded when testing with very high voltage.

I mentioned earlier that measuring input impedance at low drive levels may present a problem for some applications. A couple of these that come to mind are vented loudspeaker enclosures and constant voltage distributed system transformers. I’m sure the interested reader will find others. 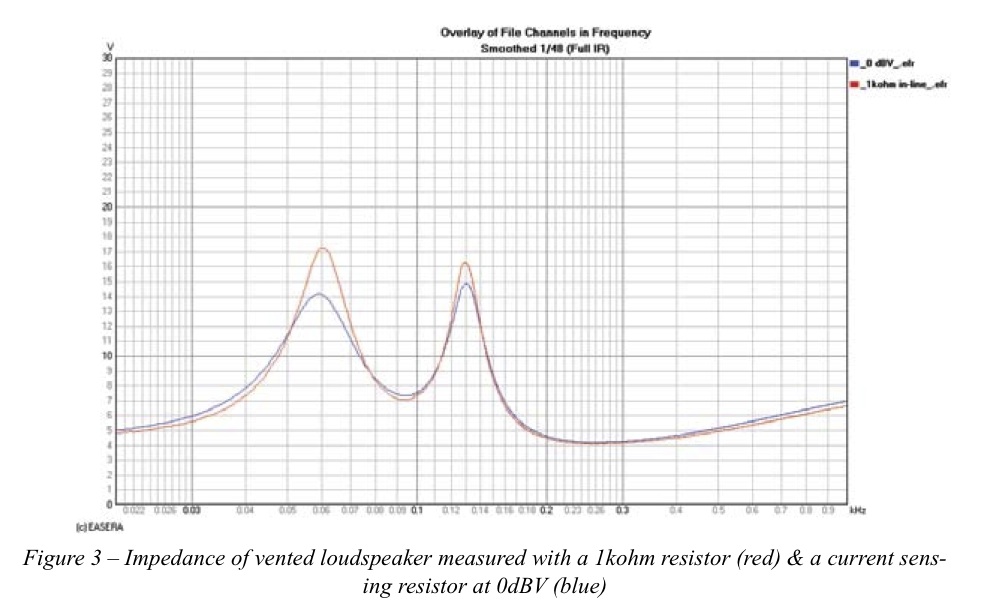 The vent surface area of this loudspeaker is relatively small compared to the surface area of the driver. When the woofer is driven harder it moves a lot more air. The vents are too small to allow this same volume of air to be moved through them. The vents saturate. As more air attempts to move through the vents they saturate more and have less of an effect on the loudspeaker response. The impedance response begins to look less like a vented box and more like that of a sealed box.

A constant voltage distributed loudspeaker system typically requires transformers to be placed immediately in front of the loudspeakers to step down the voltage and step up the current. Testing these types of transformers at low voltage levels typically will not reveal some of the problems that may occur in actual usage. Figure 6 shows the input impedance for each primary tap of a 70.7V step-down transformer with its secondary loaded by an W power dissipation test resistor. For each of these measurements the drive voltage was 6.5V. This is approximately -21dB from the full rated voltage of 70.7V. As expected the impedance curves are fairly well behaved. 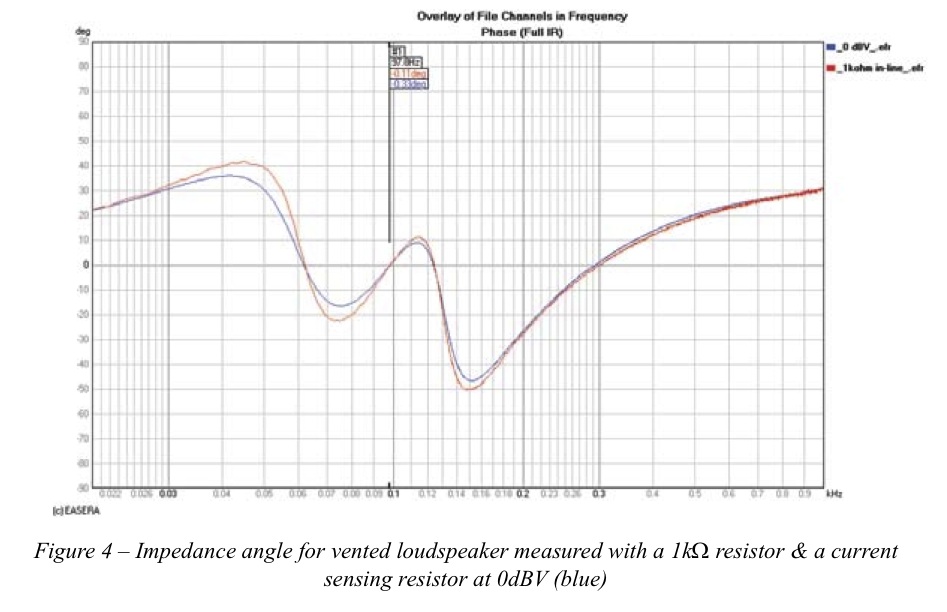 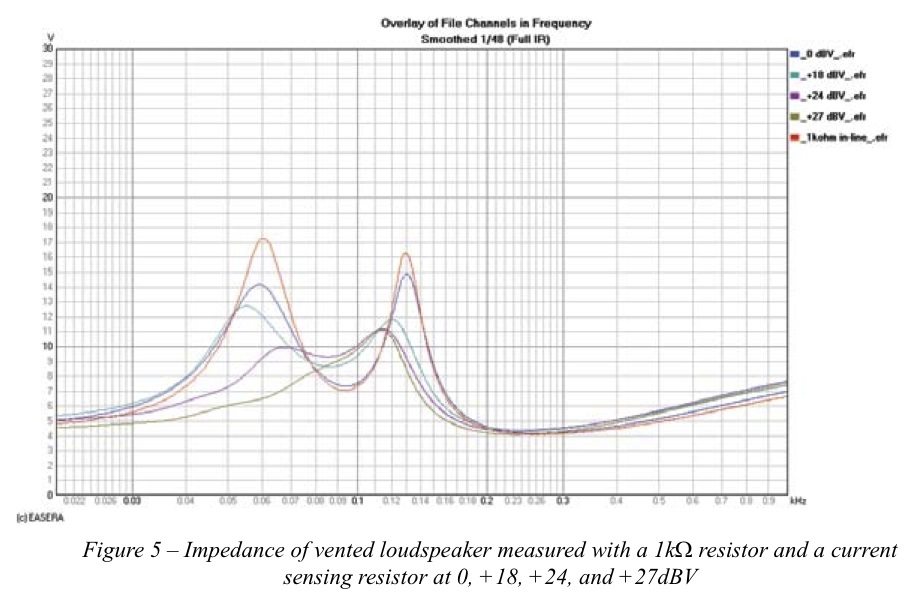 When driven at 35V, -6 dB from full rated voltage, there is a problem with the 32W tap seen in Figure 7. At very low frequencies this transformer does not like being driven at this voltage. The result is that the core saturates. The reflected impedance of the load (on the secondary) as seen by the primary is no longer what it should be. By placing a second-order Butterworth high pass filter in front of the amplifier driving the transformer this condition can be corrected. A doubling of voltage to 70V would require the corner frequency of the high pass filter to also be doubled. In this case, the corner frequency should be increased from 30 Hz to 60 Hz.

Another use for these types of measurements is to investigate resonance behavior. This can be particularly interesting when viewed as a 3D waterfall. The impedance response of a vented enclosure is shown in Figure . There are two features in this graph that should be noted. This is the dip/peak at 40Hz and 0Hz. You will notice 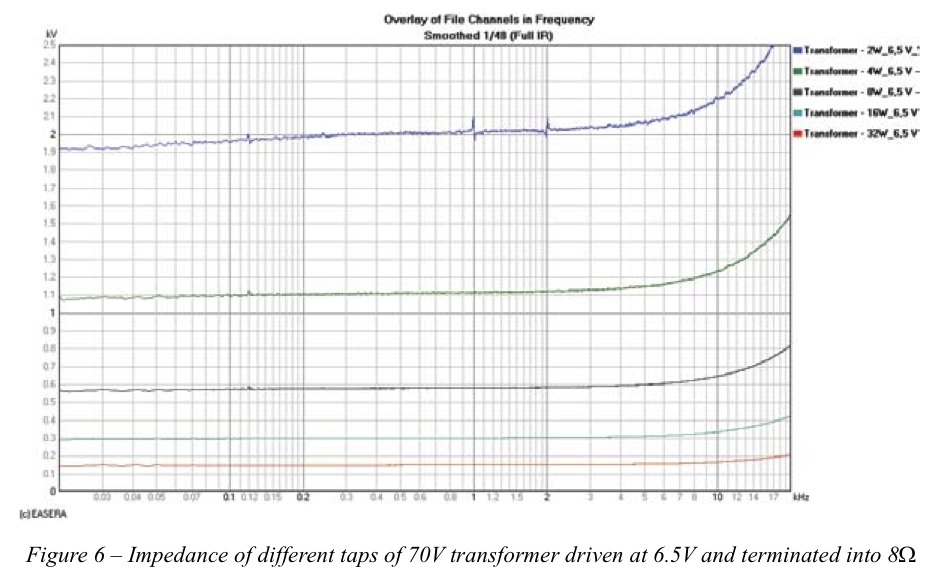 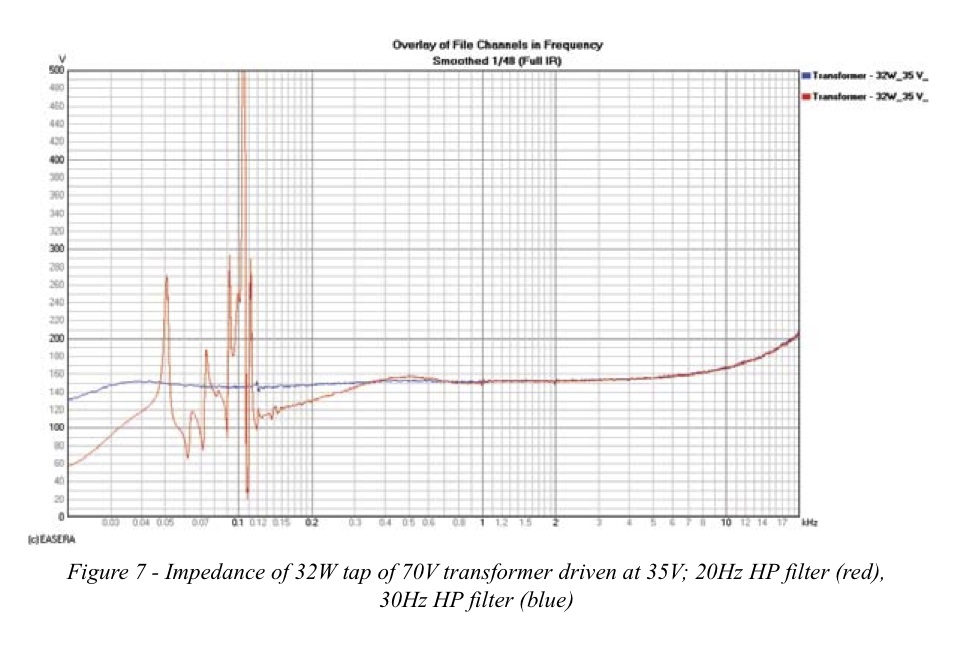 these same frequency regions in Figure 9 & Figure 10. These features don’t occur initially. It is only after approximately 60ms that they become evident. Knowing how long it requires for this resonance to develop may help determining its cause and implementing a solution.

I hope that the method discussed here to measure impedance at typical application drive level and illustrating some possible uses will be of benefit.

Thanks to Jay Mitchell and Dr. Eugene Patronis for their insights on some of these applications. ch 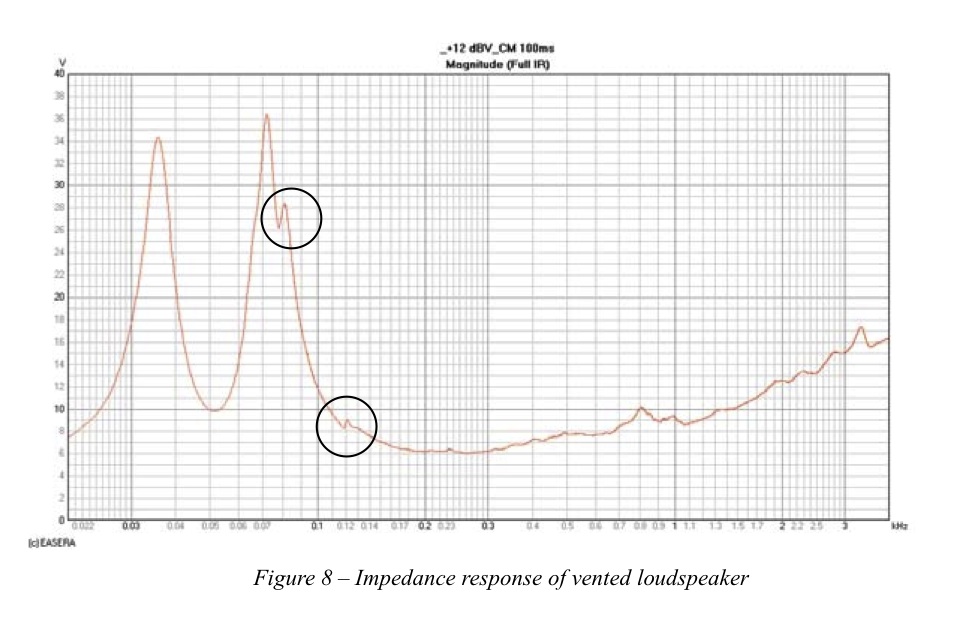 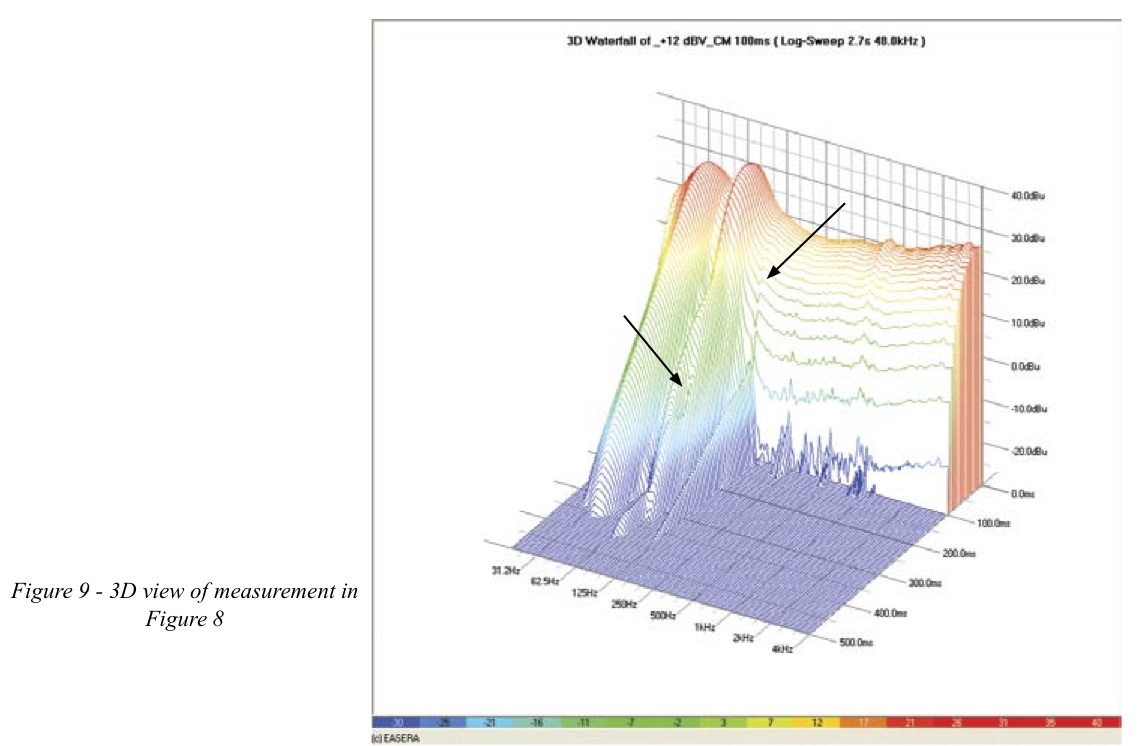 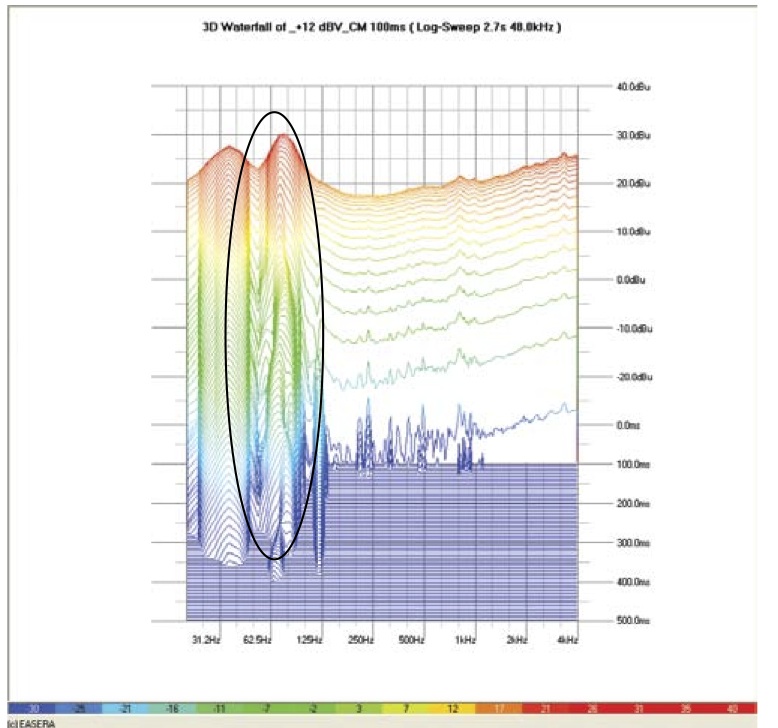 Roll your own acoustic source for STI testing
The Amplifier-to-Loudspeaker Interface
Measuring RMS Voltage: Many Meters Will Do
30 Years of SynAudCon Synergy
Product Data Sheets - What should be on product data sheets?
Loudspeaker Power Ratings - Why all the Fuss About Power?