All rooms are plagued by room modes. They occur when low frequency acoustic wavelengths “agree” with an interior dimension of the space, producing hot and dead spots at the mode frequency as you move about the room. The dead spots are called nodes, and the hot spots are called anti nodes. These room resonances produce a very uneven frequency response and subsequent coloration of the sound of a loudspeaker. The resonances also produce time domain ringing at the modal frequencies.

Bass traps are an acoustical method of dealing with room modes. An enclosure is built and tuned to the same frequency of the room mode. When placed in an anti node position (usually a corner), the level variations caused by the mode are reduced throughout the space. Bass traps are tricky because tuning is critical and retuning requires physical changes to the trap.

The E-Trap™ from Bag End Loudspeakers is the first electronically-tunable bass trap. It resembles a small subwoofer system. An internal microphone picks up the sound from the room through a narrow band pass filter. When tuned to a given frequency (an anti node), it radiates sound energy that cancels the modal frequency, smoothing the frequency response of the room. This is room tuning in a literal sense. 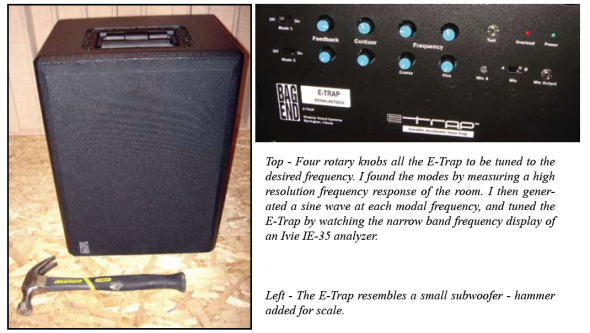 Unlike narrow band notch filters that dramatically alter the frequency response of the loudspeaker, the ETrap tames the resonant characteristic of the room. Other sound sources such as acoustical instruments will also benefit. Two mode correction circuits are provided, each of which can be tuned to a different anti node.

I tried the E-Trap out on my small, shoebox listening room. I cut right to the chase and just put the mic at the listening position. Even though it was built using one of the “golden ratios,” room modes still exist and produce a boomy low frequency response. The E-Trap’s range extends from 20Hz to 65Hz, and conveniently my room has two pronounced anti nodes at the listening position in this range. The graphs on the next page show the response with and without the E-Trap engaged.

While I have heard bass traps before, I have never been able to switch one on and off while listening. It’s an enlightening experience that gives a new appreciation for the importance of low frequency resonance control in small rooms. pb 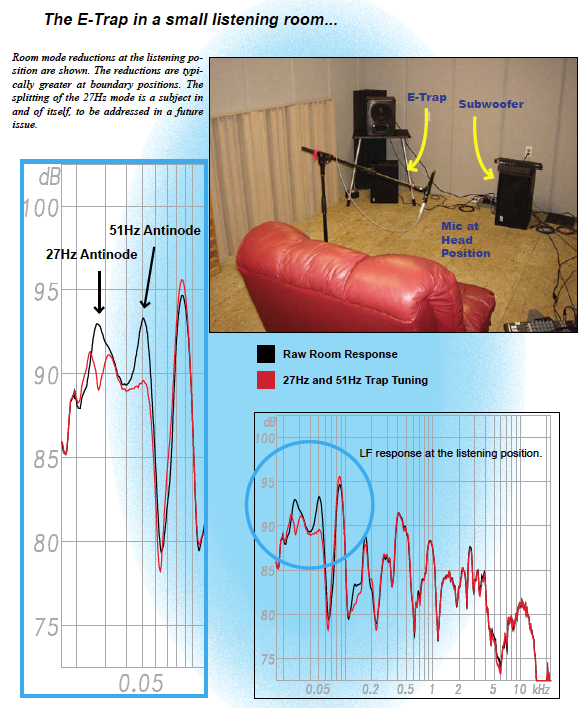