Can a Cell Phone Be An Audio Analyzer?

In the May issue of the Syn-Aud-Con Newsletter I published some impulse response/transfer function data for Apple’s first generation iPhone™. The data showed that the iPhone has a very flat frequency response magnitude, but a frequency-dependent group delay that produces significant phase shift over the bandpass of the device – a behavior that is not characteristic of the other iPod models. The iPhone has been touted as the “best iPod yet” by many users, so this caused quite a stir in some circles. Since it is a hot topic I have decided to add another chapter to the saga.

One reason for the drama is that audio/acoustic analyzer programs are now available for iPhone. There is a lot of computing horsepower in this little device, and the display and user interface are, well, superb. There is much to gain if it can be an analyzer.

My IR data was gathered by transferring a log-swept sine wave (WAV format) to the iPhone and playing it back into a recorder. The recorded file is convolved with an inverse version of the original sweep file to yield the iPhone’s impulse response. The iPhone’s IR is time-smeared when collected using this method.

What is Going On?

The answer to this is a simple “I don’t know.” I have investigated at length and have produced the exact same result with multiple recorders and multiple iPhones. The iPod works as expected, so there is something going on with the file playback of iPhone. Unfortunately these little devices are very complex with very little published in terms of real performance data. One can only speculate as to the cause, and I won’t even do that. I simply repeat my warning from the earlier articles that iPhone should not be used as a sweep source for IR collection. I really wanted it to work for that.

The audio circuitry for the dock connector is different than that for the headphone jack that I have used for the testing up to this point. I bought Apple’s pricey little breakout kit and repeated the tests. No change.

Since signal generator software is available for iPhone, I decided to have a look at a square wave produced by Signal- Suite (more on that later in this article). To my surprise, the square wave looked respectable, albeit not perfect. It was definitely an improvement over what I was getting with the sweep tests. This suggests that whatever is going on with iPhone could be due to something other than the hardware, offering a ray of hope for using iPhone as a measurement tool.

In the engineering world, a failed attempt means to try a different path. I loaded both forward and inverse sweeps into the iPhone and made an analog recording of each from the headphone jack. When convolved together the result is the perfect impulse/ideal transfer function that I was looking for (Figure 1). This evades the iPhone phase issue by correcting it via the inverse sweep. Of course there are some caveats:

The fact that this works validates the methodology used for the test. So, given the above the iPhone can indeed be used as a program source for collecting room impulse responses using the sweep deconvolution technique. Download the freeware GratisVolver (www.catt.se) to experiment. The “iPhone-compensated” inverse sweep can be downloaded here (zipped with the forward sweep). I’ll stick with the iPod for this task, but it is nice to know that I can use the iPhone if I have to. I just have to remember to use the iPhone-corrected inverse sweep for deconvolution.

The iPhone as an Audio Analyzer

Given its high res display, built-in mic and processing power, it was inevitable that audio/acoustic analyzer apps would be developed for iPhone. While the skeptic in me says “It’s a cell phone. Forget it.” the practical side of me says, “Yeah, but it’s always in my pocket. Give it a try!” I did, and here is what I found.

SignalScope™ from Faber Acoustical turns the iPhone into a real-time spectrum (frequency) and waveform (time) analyzer. I used it to look at the near-field response of a studio monitor, and could easily determine some useful stuff like approximate bandwidth, plane of crossover alignment, and crossover frequency. There are no fractional-octave filters, so white noise must be used as the stimulus for checking frequency response. The display is fast and fluid – maybe the best I have seen on a hand-held FFT.

Of course there are caveats regarding hand-held spectrum analysis in general, specifically the inability to distinguish between direct, reflected and reverberant sound fields. The iPhone or any hand-held RTA has limitations, and it is incumbent on the user to understand these limitations and work around them. But, this is a genuinely useful analyzer program, and the price ($24.95) can’t be beat.

Faber’s SignalSuite™ turns the iPhone into a signal generator. The usual variety of waveforms are produced, including sine, square, swept-sine, and the expected flavors of noise. The user interface is intuitive (as one would expect from Apple-world), and it works VERY well. An especially useful feature is the ability to change the sine frequency without zipper noise by dragging the finger – ideal for finding box and room resonances, etc. It’s consumer level unbalanced, so there is not enough voltage swing to drive professional line level products to their full output unless you go through a mixer or preamp. 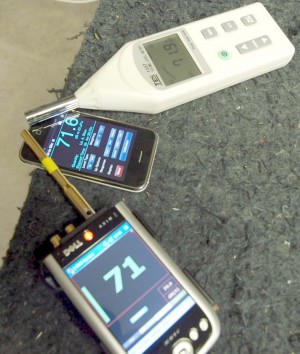 Here’s the application that most perked my interest. One never has a sound level meter with them when they need one. Faber’s SoundMeter™ is a SLM for iPhone. It has more features than one would expect on a basic SLM, including LEQ and calibration. I calibrated it using a dedicated SLM and then casually measured some environmental noise sources around the shop and octave-banded pink noise played from a studio monitor. For comparison I positioned the mics of three SLMs at roughly the same point in space (Figure 2), and compared readings on 63 Hz – 8 kHz octave banded pink noise using A-weighted Slow settings. All three meters were in good agreement (2dB window) except for the 63Hz band, where the iPhone reported 4dB less than the other two. The lowest level that I could measure with iPhone was about 38dBA, and clipping occurred at 105 dB Peak (about 94 dBA-Slow). The tests were repeated with C Weighting with essentially the same results

IPhone’s mic is on the bottom, to the right of the dock connector. This is a bad place for the microphone of a sound level meter (or spectrum analyzer), as the hand and wrist may block the high frequency sounds. If you flip the iPhone upside down the display flips too, allowing the mic to be used free from obstructions. The housing around the mic is fairly stealthy regarding reflections, but if the measurement task is critical one would probably switch to a dedicated measurement platform. The mic response is shown in Figure 3. IPhone is a decent general purpose SLM unless you are measuring something very soft, very loud or very low in frequency.

SoundMeter and the ever-presence of the iPhone in the pocket may raise awareness of excessive exposure, and will certainly help audio people develop a better feel for the SPLs of shows, restaurants and airplanes. If this cuts down on the exaggerated expectations of clients (“We need 120 dB at the back row!) then the iPhone may actually help straighten out the whole marketplace. I am glad the iPhone clips at 105 dB peak, as this effectively signals the need to leave the venue or insert hearing protection. If it can’t be there, then neither should you!

This was obviously not an in-depth review of these apps, nor of the use of iPhone as an analyzer. Should we expect iPhone to suffice as the primary analyzer for an audio pro? No. Are there some useful capabilities that iPhone can offer the audio pro? Yes. Every audio practitioner I know would love to have a decent signal generator, FFT and sound level meter in their pocket at all times. It may not be my best analyzer, but it is the handiest, and it will save me enough time on occasion to easily justify the investment in the Faber suite, and even the iPhone itself. Add to that the fact that it can take photos, play speech tracks, serve as RPN calculator, and even check email. With the on-board GPS it can even help me find the car after the gig.

The iPhone is what it is – a convenient processing powerhouse with a really nice user interface. While it can do some cursory audio duties, audio pros will still need that dedicated instrument to do billable work. You will love it if you get it, but if you get it don’t think you are tooled up as an audio professional. There are many capabilities that are missing that audio people rely on daily. That said, I don’t want to understate its capabilities or usefulness. What it does, it does well. With the limitations on I/O, input voltage and form factor, I don’t foresee it going much beyond its current capabilities as an audio/acoustic analyzer. But, the “on-the-go” factor can’t be ignored and that counts for a lot. About half the game for the audio practitioner is to have what you need when you need it. Measurements will be made in situations where they otherwise wouldn’t have, and much good can come from that. pb

Collecting Binaural Data for Recordings - Accuracy vs Realism
The Amplifier-to-Loudspeaker Interface
Error Sources in Loudspeaker Data
How to extract an impulse response from a recorded sweep?
Real-World Reverberation - PureVerb™
Loudspeaker Pairs - How Close Are They?