By Pat Brown and Peter Mapp

In this article Pat Brown and Peter Mapp looks at early decay time as a system performance benchmark.

It’s been over 100 years since Wallace Clement Sabine did his ground-breaking acoustical study of the Fogg Auditorium at Harvard University. His study gave us the famous Sabine equation for the reverberation time of an enclosed space. The importance of the Sabine equation cannot be over-stated. It launched the field of architectural acoustics started researchers down the road of formalizing and quantifying the behavior of sound in enclosed spaces. 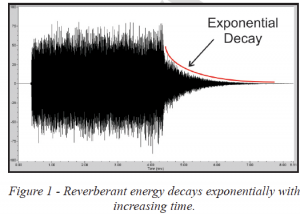 Sabine’s equation describes the decay of a reverberant “tail” of sound energy in a room with low absorption relative to its internal volume. Sabine discovered that sound, like many other quantities, has a “half-life” that produces an exponential curve when plotted against increasing time (Figure 1), much like the half-life of radioactive materials or carbon-14 in the dating processes used by archeologists. Other quantities have similar decay properties when plotted as a function of time. Notable examples include the decay of light in a light- emitting diode (LED) and the voltage across a capacitor. Based on this type of energy behavior, Sabine’s equation estimates the time required for the reflected energy to become inaudible (-60 dB) after the sound source has been interrupted – the RT60.

The point is that once the reflected energy becomes diffuse, it decays at the same rate until it is inaudible. The assumption is that the room has low absorption and that the absorption present is uniformly distributed. Unfortunately, the bulk of spaces that require sound reinforcement do not meet these criteria. 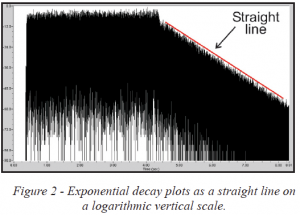 Ironically, the mathematical tool required to describe such a decay had already been invented. John Napier’s logarithm used a scale formed by plotting the exponent of a base rather than the base itself. This “exponential” scale was perfect for describing the half-life decays of radioactivity, sound and other quantities. The exponential decay curve becomes a straight line when plotted on a logarithmic vertical scale as a function of linear time. This makes it possible to describe the decay of sound in a space as being linear with respect to time (Figure 2).

When an exponentially decaying room is continually excited by a sound source, more sound is introduced before the existing sound can die away, and a steady reverberant field develops. Such fields can interfere with communication if their level is excessive. In even the most reverberant spaces, the first few words of a sentence can often be understood before the reverberant field swells up to mask the remainder of the sentence.

Sound researchers have long realized that all of the sound fields in an enclosed space do not follow the rate of decay described by the Sabine equation, which describes sound after it has reflected enough times to become random. The first few reflections, which are often good facsimiles of the direct sound, are likely to decay at a different rate. This “early” decay is strongly affected by the directivity of the sound source and surface materials of the objects near it. The early-decay time, or EDT, is often of greater significance to the sound system designer than the statistical decay time described by Sabine. If the EDT is shorter than the RT60, the clarity of a sound source is increased over what it would be if the early energy followed the same rate of decay as the late energy.

Sound system designers use device directivity and strategically placed reflective surfaces to shorten the EDT, thus improving the clarity of speech and some forms of music. Like a lever produces a mechanical advantage when lifting a heavy object, a short EDT provides an acoustical advantage for communicating in a reverberant space. Comparison of the RT60 and EDT can reveal whether the sound system is doing its job of improving the conveyance of information from source to listener. EDT measurements are useful for evaluating a sound system’s performance.

Unlike the RT60, which can be measured with a stop watch, the EDT requires the scrutiny of time spans well under one second. Decay time measurements in general require the collection of the room’s impulse response, IR. A number of techniques exist, but all yield the response of the system/room to a pulse of energy. The hand clap is a crude IR test.

To evaluate the EDT, the IR is plotted on a log- squared vertical scale (Figure 3). A Schroeder backward integration (summing energy from right to left) facilitates the placement of cursors used to derive the EDT. The process considers the 60 dB decay time calculated by a straight line fit to the portion of the decay curve between 0 and -10 dB. 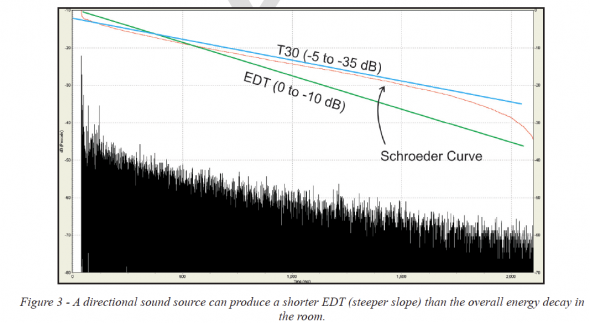 In contrast, the T30 is the 60 dB decay time for a straight line connecting the -5 dB and -35 dB points on the Schroeder curve. The T30 is often used in place of Sabine’s RT60, since it can be measured under noisier conditions. It should yield similar scores for exponentially decaying sound fields.

It becomes apparent that if the very early energy is increased relative to the later energy, the EDT will be shorter than the T30. System designers accomplish this by using directional loudspeakers aimed into an absorptive audience. The result is increased clarity and intelligibility, even in rooms that are otherwise very reverberant. Designers that fail to utilize loudspeaker directivity and audience absorption in reverberant spaces are forfeiting two of their most powerful tools for improving the quality of communication in the space.

Since the EDT is strongly influenced by the early energy (which can vary significantly from seat-to-seat), the EDTs for a given space vary in value more than T30. Whereas the T30 is a global room parameter, the EDT is seat-specific – no single number can describe the entire space.

EDT as a Performance Benchmark

If an omnidirectional sound source were placed in a room with low internal absorption, and located away from reflecting surfaces, exponential energy decay at a listener position would begin almost immediately after the first energy arrival. If the source were made directional, and/or hard surfaces were placed near it to increase the level of the first reflection, then the onset of a pure exponential decay is postponed until later in the IR. Two rates of decay will exist – one for the early energy and another for the late. This is what the EDT attempts to measure. Looked at another way, a sound system designer can gain an advantage over the statistical characteristic of the room by using loudspeaker directivity and placement to increase the level of the first energy arrivals at a listener position. A comparison of the EDT and the T30 should reveal how much of an advantage has been achieved.

Figure 4 plots EDT vs. T30 in a 2.2 s (mid band) church. The increased early energy for listeners closer than 4 m should provide an improvement in clarity. 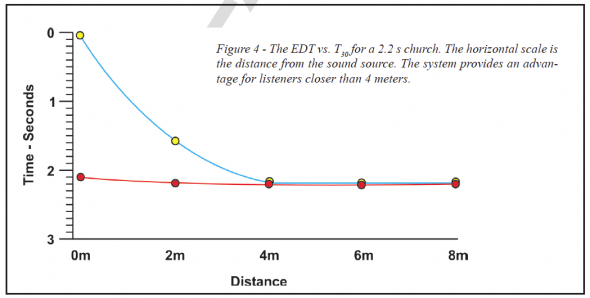 Figure 5 shows an IR that was gathered in a statisti- cally reverberant space using a low directivity sound source. The measurement position is beyond critical distance. The EDT and T30 are numerically the same, so no real advantage in the direct-to-reverberant ratio has been gained by using a sound system. 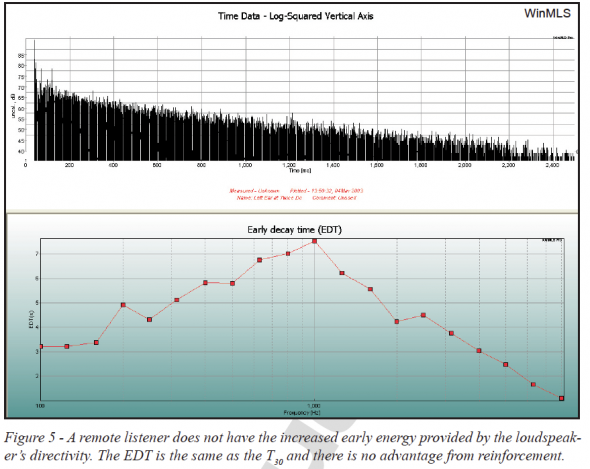 Figure 6 shows an IR gathered inside of critical distance. The EDT is now shorter than the T30. This listener position has improved clarity of speech and music due to the increased early-to-late energy ratio. If further investigations were performed, we would find that this improvement in performance is limited to the seats that are in the direct field coverage of the loudspeaker, making the benefits of directivity position-dependent. It is the job of the system designer to assure that all listener seats are located within the coverage patterns of the loudspeakers. 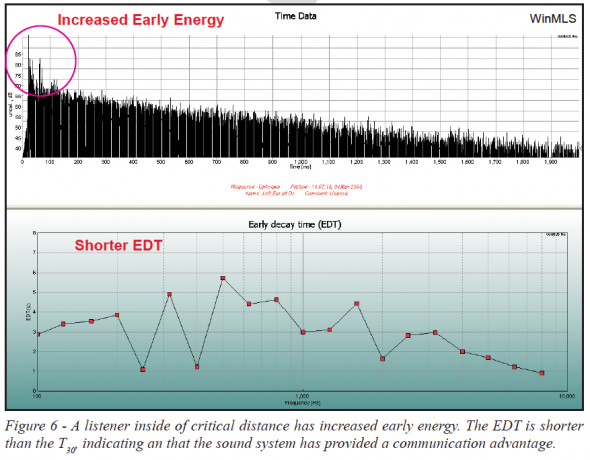 The International Standards Organization (ISO) document 3382 describes the methods for measuring EDT and other acoustic metrics. The emphasis of the methods and practices described by the document are to evaluate the acoustic characteristics of spaces using low-directivity sound sources that emulate the acoustical characteristics of musical instruments and human talkers. They were not designed specifically for the evaluation of the performance of sound reinforcement systems, which often utilize transducers with high directivity factors (Q). As such, we have seen some variation in EDT scores between measurement platforms. While the cause of these variations is not fully understood, they do exist and this fact should be considered by the measurer. EDT scores should be considered along with other metrics (i.e. C-ratios, T30, STI and %Alcons) when evaluating sound system performance. pb & pm