In this article, Pat Brown addresses some subtleties regarding early decay time calculation and significance.

The Spring installment of our Newsletter featured an exposé on the Early-Decay Time and its relevance to the design of a sound system. This time we will peel another layer or two from the EDT onion and examine some subtleties regarding its calculation and significance.

From last time, both EDT and T are based on the Schroeder reverse integration of the impulse response. This means that the data points of the ETC are summed from left to right and plotted above the ETC data. The Schroeder curve presents a smoothed view of the room decay.

The T30 considers the time required for the Schroeder curve to decay from -5 dB to -35 dB, extrapolated to 60 dB of decay. It ignores the effect of very early energy arrivals a the listener position, such as strong low-order reflections. The T30 is typically numerically the same as the classical RT60 described by Sabine.

The EDT considers the decay of the Schroeder curve from 0 dB to -10 dB. According to ISO 3382, the EDT is determined by 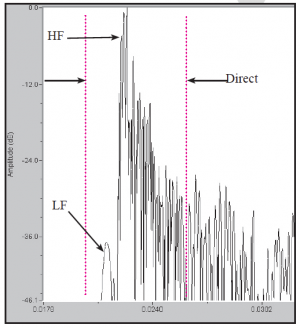 Fig 1 – Many loudspeakers do not have a distinct arrival time for any part of the spectrum. This can be due to crossover networks, throat reflections, box resonances, mis-alignment, etc. This can complicate the determination of the EDT. The ETC at the left is of full-range loudspeaker system using a large-format CD horn.

computing a “least squares” fit to the Schroeder curve in this region. The slope of this line is then extrapolated to 60 dB of decay. The strong early energy contributions from directional loudspeakers and first-order reflectors (i.e. orchestra shells) can produce a sharper decay of the early part of the Schroeder curve vs. the late part. Research and demonstration suggests that the early part is of greater significance to the listening experience than the later part, making EDT potentially more significant than T30 for evaluating what a listener is experiencing.

One factor that complicates the determination of the EDT is the arrival time of the direct field. The arrival of an impulse of acoustic energy at a point in space is a bit vague. High frequency events are relatively localizable, but arrival time certainty decreases with decreasing frequency. Lower frequency events are spread out in space and time relative to high frequency events. Even at higher frequencies many sound sources produce several arrivals that can be attributed to the reflecting surfaces that form the device (Fig. 1). The first arrival may not be the most significant, and measurement systems that automatically locate the “direct” arrival may ignore one or more of these early peaks. So, as the Schroeder curve is formed by integrating the energy from right to left, the left-most border can vary significantly if different “starting points” are considered (Fig. 2). 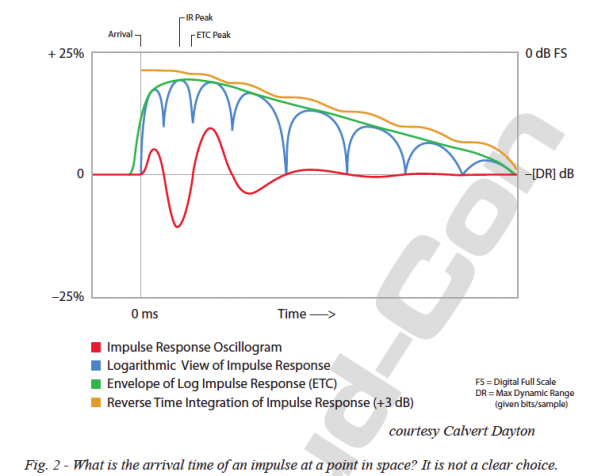 These and other factors can significantly affect the determination of EDT, and were not strongly considered when the EDT method was standardized by ISO 3382 in 1997. The context of the standard is room evaluation, not sound system evaluation. As such, a better method for using this metric for sound systems may yet emerge. We suggest that software developers (and end users) follow ISO 3382 in the implementation of EDT, while allowing for other possibilities in its determination. Several measurement platforms allow determination of EDT by both ISO 3382 and user-selectable methods (Fig. 3). 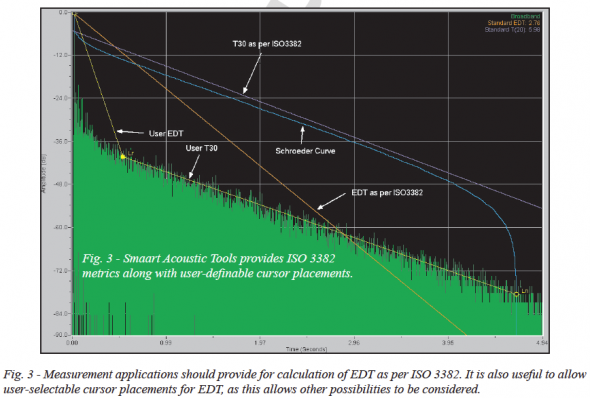