Equalization of a loudspeaker is usually done on-axis.  In this article, Pat Brown suggests a modification to this approach.

The procedure often followed for equalizing a loudspeaker is to place the measurement microphone on-axis and adjust for the flattest frequency response. This often involves boosting some filters when the axial response over a range of frequencies is lower than the average. Those that are opposed to the use of boost filters may choose to arrive at the same resultant response by reducing (cutting) parts of the response to the lowest common denominator. This results in the same electrical curve, but without compromising headroom in the signal chain. The whole procedure is initially performed looking at the direct field of the loudspeaker.

This article suggests a modification to this approach, by considering the off-axis as well as the on-axis response. The goal of the equalization process is to produce a better sounding system for the audience. Yet a relatively small percentage of the audience sits in the on-axis position. It would therefore seem ill-advised to consider only the axial position when equalizing a system. Another popular approach is to average the response of a number of seating positions to arrive at the best “common denominator” curve for the equalizer. This can also produce good results, but care must be taken to exclude artifacts due to room reflections from the measured data, as each movement of the mic places it in a different acoustic environment. This makes it a challenge to limit the response measured at each test position to the direct field from the loudspeaker. Most contributions from the room will be random at different seating positions and not addressable by equalization. So, the spacial average is not a bad idea, it is just hard to implement.

Another Path to the Same Destination 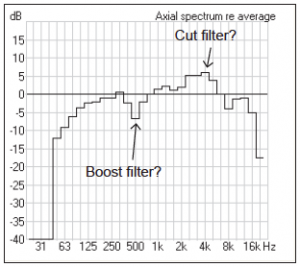 Figure 1 – The on-axis 1/3-octave frequency response magnitude of a multi-way loudspeaker. Conventional wisdom suggests the application of filters to “flatten” the response as shown. But doing so without examining the balloon data could produce off-axis problems.

Another way to consider off-axis listener positions is to determine the base equalization curve for the loudspeaker by observing its 3-dimensional radiation balloon. A properly gathered balloon will reveal the anechoic response of the loudspeaker at all listener angles. Since the direct field of a loudspeaker is considered to be largely independent of the acoustic environment (at least at short wavelengths), direct field equalization based on balloon data has a strong theoretical basis.

Figure 1 shows the axial frequency response of a multi-way loudspeaker. The dip in response at 500Hz is due to phase cancellation between multiple drivers in the box. A boost filter at this frequency center will restore the axial response to flat. But observation of the entire radiation balloon at 500Hz (Figure 2) shows that the devices come into phase at two off-axis positions, possibly producing a significant peak in the response for many of the audience members. The “correction” made to the on-axis response will produce an even less ideal response off-axis where a greater number of listeners are located, or even worse at a microphone position causing a feedback problem. Devices that have a destructive phase offset at one listener position are likely to have an in-phase relationship at another. The notch might better be addressed by the use of precision signal delay between the elements. 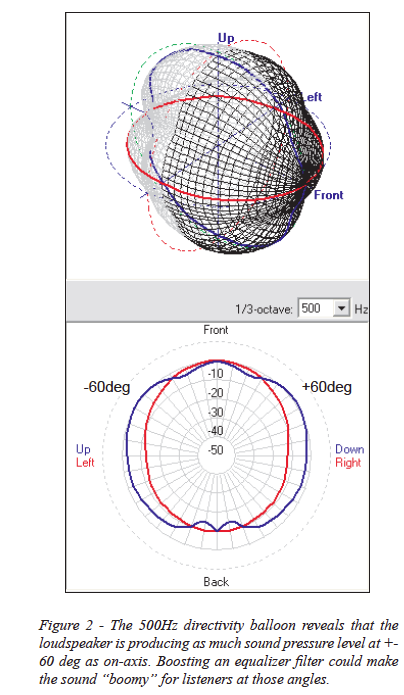 In general, for a single transducer equalization will inflate or deflate the balloon at a specified octave band. The same effect occurs at all angles around the device. But what is often needed is a re-shaping of the balloon. This can be accomplished by using multiple elements and varying their physical spacing and relative delay. This is the heart and soul of beam-steered loudspeakers. Boost and dip filters applied based on the axial response only can change the directivity of a multi-element device, since the phase shift introduced by the filter can cause a change in the way that the multiple elements interact.

It should be noted that psychoacoustics also plays a role in this. Peaks in a frequency response are much more audible (and bothersome) to humans than dips in the response. We are more aware of “too much” than “too little.” A safe approach to equalization that embodies the theories described herein is to avoid the use of boost filters when calibrating a sound system, since it is better to have “too little” than to have “too much.” If a sound practitioner used the axial response for equalization, and cut-only filters to smooth the resonant peaks, acceptable results would likely be attained for most listeners since off-axis lobes will not be “inflated” by the process.

Loudspeaker balloon data is useful for direct field equalization of a loudspeaker. It is plausible that the complete equalization of the direct field can be determined from the axial frequency response and the spherical balloons. The remaining equalization chores can be left to the installer or commissioner of the system. This can include compensation for boundary loading, device coupling, etc. The possibility also exists based on the above for a manufacturer to provide an appropriate equalization curve in the form of a simple magnitude vs. frequency plot or as a setting that can be imported into popular digital signal processors. pb