Dale Shirk helps us to understand the principles of how the cardioid sub can control the directivity in lower frequencies.

Not quite; to produce directivity by wave interference does indeed require dimensions comparable to the wavelength. However to produce directivity by pressure difference need only involve dimensions of a small fraction of a wavelength. This does come with it’s own set of drawbacks, but when properly understood and applied, it can be a very useful tool for the audio system designer. I speak of the gradient array loudspeaker, sometimes called the cardioid sub, after the shape of one of the polar patterns available. Scaled appropriately, the principle can be used at any frequency, but we usually need it the most at the lowest frequencies. The cardioid sub can produce increased level in the audience and reduced level at the microphone.

For convenience we’ll refer to cardioid subs throughout this article, but there are in fact a whole family of polar patterns available, sub-cardioid, cardioid, supercardioid, hypercardioid, and bidirectional. The cardioid pattern is particularly useful for low frequency radiation (Figure 1). Have you never wondered how a ½-inch microphone can be directional for a 20-foot wave? Gradient microphones and gradient array loudspeakers operate the very same way. In fact, in just the same way that some microphones offer electrically controllable directivity patterns, the gradient array loudspeaker’s polar patterns can be adjusted simply by making changes in the digital processing used.

Lest you think that this is some new thing, made possible only by the latest DSP magic, I must point out that this was written about extensively by Harry Olson and others, many decades ago.

Let’s look at how this works, and how you can implement it using ordinary loudspeakers. The basic first order gradient array is best implemented using two sealed or reflex boxes, that are relatively small compared to the wavelengths we are interested in controlling. For the sake of discussion let’s consider a cardioid polar pattern with a design frequency of 140 Hz. This means that the polar pattern will remain constant for frequencies below 140Hz, but start to get peculiar above 140Hz. This will need to be our low-pass crossover frequency as well. The speakers will be placed 1/4 wavelength apart, one behind the other. For 140Hz, this is two feet.

We’ll run them with the processing shown in Figure 2. Both loudspeakers get the same crossover and the same overall EQ, including an additional single pole low pass filter. The back loudspeaker also gets a delay, a polarity inversion, and perhaps another EQ. The delay is set to equal the acoustic time-of-flight between the loudspeakers. In our example using two-foot spacing, the delay is 1.78 milliseconds.

Now look at Figure 3b, which is the same thing in the reverse direction. Here the electrical delay applied to the rear loudspeaker, exactly equals the time-of-flight delay from the front loudspeaker. This leaves the waves exactly in phase, but opposite polarity. Thus the waves will cancel each other for a deep null at a distant point.

What happens at other frequencies? Well, the rear case is easy. All frequencies arrive in phase and opposite polarity. They will always cancel. The front wave is a little more difficult. For frequencies either lower or higher than the design frequency, there is a different phase relationship between the two arrivals.

As frequency lowers they become more in phase, having less than 180 degrees of phase shift (Stay with me here). Because they are still opposite polarity, the closer they come to each other in phase, the more they cancel. As frequency decreases the combined output in the forward direction is reduced. As frequency increases, the combined output in the forward direction also reduces, however at other angles, with less time-of-flight delay, there will be strong, full output lobes. With higher frequencies still, there will be more peaks and nulls. The result will be the comb filtering and lobes expected from multiple sources offset in space and time. I don’t know of a practical use for the array much above it’s design frequency. However the important aspect, the one we wish to utilize, is that from the design frequency down, the polar pattern holds constant, to as low a frequency as one wishes to go.

Herein lies the trade-off. The amplifier power required will increase as frequency decreases. The maximum output of the array will also decrease as frequency decreases. Two octaves below the design frequency, the output capability of the array will be 6 dB lower than the output of a single box by itself. Obviously this is not for an application where every last ounce of output available is needed. However, for small rooms where low frequency control may be needed most, and where high output is not needed, this is certainly a viable option.

By adjusting the delay applied to the rear driver, we can also produce other polar patterns that may be useful. By introducing less electrical delay than the driver spacing would suggest, we can get supercardioid, hypercardioid, and bidirectional polar patterns. These will of course have a rear lobe, which, incidentally is opposite polarity from the front lobe.

These gradient arrays also exhibit proximity effect as well, just like a cardioid microphone. This is the result of the cancellation in the near field, being less than expected in the far field. In the far field condition, we are expecting equal levels from both loudspeakers, being essentially equal distance from both. As we get closer, there will be slight differences in level from the two speakers, as the difference in distance between them becomes significant. To the extent that this causes less cancellation than expected, there is a level boost. I’ve not found this to be significant in any installation I’ve done.

How does one go about designing and setting up such an array? The design is best done with modeling software, such as EV’s ArrayShow™, or EAW’s F-Chart™ (Figure 6-see below). This will quickly show what patterns are available and over what frequency range they will work for a given loudspeaker spacing. The closer together the speakers are, the higher the frequency the array can be used. However, the larger the frequency range it is intended to operate over, the more low frequency cancellation will need to be compensated. Careful attention should be given to the whether the design can meet the required output at the lowest frequency of interest, considering the extra amplifier power needed and the acoustic output that is lost by the cancellation. Coverage mapping in a room can be done in EASE, CATT-A and similar programs, by entering the appropriate microphone directivity balloon at the sub array location. The supercardioid is particularly useful as part of an overhead cluster, as shown in Figure 4. 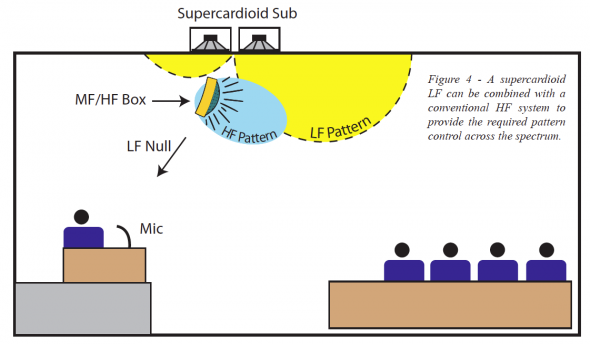 Tuning the array in the field is accomplished in two steps. First place a measuring microphone at the location where you want maximum cancellation, typically at the podium. Then measure the output of the front woofer only. Either set it as a reference or turn on overlay. Now measure the rear woofer only, with normal polarity, and adjust delay, level and the individual EQ for the rear woofer, so that both magnitude and phase response overlay as closely as possible. When this is done, invert the polarity to the rear woofer. This will create the deepest null possible at that point.

Second, place the measurement microphone out in the audience area, and adjust the overall equalizer as needed for the proper low frequency response in the room. Remember, near field measurements of a gradient array are not valid, due to proximity effect. 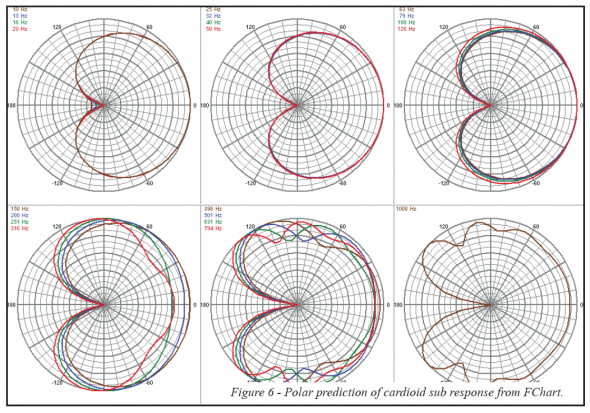