Dale Shirks presents a handy tool to help us keep Hums, buzzes and RFI out of the audio systems.

Hums, buzzes and RFI are caused by ghosts. I’m convinced of it! Little gremlins that we cannot see, hear, feel, smell or taste wreck havoc in audio systems. They come and go at their whim, and we blindly flail away, trying to shoo them off.

OK, I’m being a bit facetious here. We know how to keep the evil spirits out of our audio gear by paying proper attention to shielding, Pin-1 design, wire construction, grounding and RF filtering. But the covert ghosts we are eradicating are still there, invisible, lurking in the inky shadows, waiting for the errant mis-wired connector or plastic “shielding” enclosure. 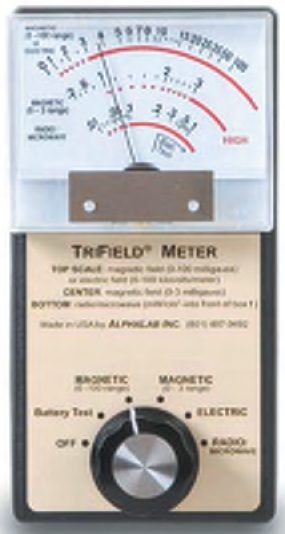 While the best approach is to keep all the “ghostportals” in our audio gear closed, wouldn’t it be nice to be able to spot some of the offenders? I recently came across a handy little meter that can do just that. I believe it could be a useful addition to the toolkit.

The Trifield™ meter is a small battery-operated handheld meter which measures low frequency AC electric fields, low frequency AC magnetic fields in two ranges, and high frequency (RF) electromagnetic fields. It displays field strength via an analog meter with logarithmic scales covering two decades. The “Trifield” name comes from the fact that it has three pickups, oriented in the X, Y, and Z axis’s, whose outputs are summed, so that it will read the field correctly, regardless of it’s orientation.

Priced at less than $200, this is a low cost, low accuracy meter, in many ways reminiscent of the ubiquitous Radio Shack sound level meter. As far as I can tell it is marketed to two general groups of people. First are those interested alternative medicine. “Fields give you cancer,” “Fields cure your cancer,” take your pick. The second group are those interested in paranormal phenomena, such as ghost hunters, UFO investigators, etc.

Still its view of the invisible fields around us can be helpful in our profession. Electric fields exist where there is a voltage difference between two conductors. Common items that emit electric fields include computer and TV screens, fluorescent lights, improperly grounded electrical equipment, etc. Fault conditions that would emit an electric field include an AC “hot” conductor run separately from the neutral or ground, and any sort of ground fault resulting in a voltage being present on a chassis.

Magnetic fields exist wherever current is flowing through a conductor. If the return current is flowing through a conductor right next to the first, especially if they are a twisted pair, then the magnetic fields will cancel, almost completely. However if the conductors carrying current are widely separated, there will be a large loop area and greater net magnetic field. Common items that emit a magnetic field include devices that intentionally use magnetism, such as motors or transformers. Fault conditions that would emit a magnetic field include current flow on grounds, such as water pipes or building steel, and any mis-wired circuit where the neutral current returns via a route separated from the hot supply current. This can sometimes happen with sloppy wiring, especially with three-way switches or “Edison” shared neutral circuits. 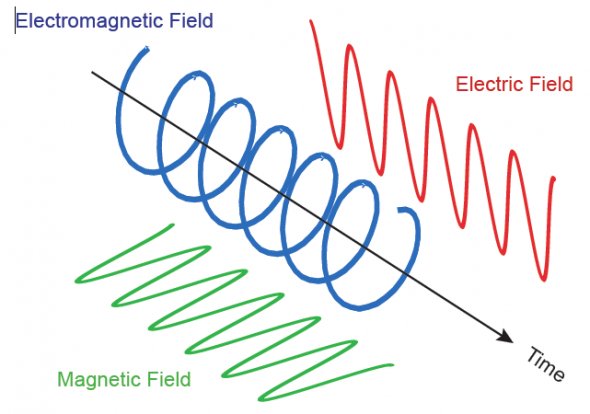 This meter is also handy when working with inductive loop hearing assist systems. The area can be checked for magnetic interference, and the drive levels can be set for proper magnetic field strength. Magnetic fields will interfere with electric guitars as well, so this meter is handy for checking out the stage area.

The Trifield meter is manufactured by AlphaLab Inc. of Salt Lake City, Utah.

They offer a number of other inexpensive meters for measuring various type of DC, AC, and RF fields, Ion counters, etc. The Trifield meter has a number of options. The standard meter has a contoured frequency response, peaking at about 1KHz, to emulate the effects of fields on the human body. Flat frequency response is a no-cost option. Also the 100XE model has greater sensitivity to electric fields. Happy Haunting! ds

Measuring RMS Voltage: Many Meters Will Do
Global Voltage Chart
Product Data Sheets - What should be on product data sheets?
It Ain't Just Dirt... Grounding to Reduce Hum and Buzz - Part 2
Basic Definitions of Integrating SPL Meters
The Forward-Referenced Interface