Three versions of an octagon-shaped room model – simple, detailed, and extra detailed are compared as actual and in virtual.  The results may surprise you.

It’s time to take the data gathered from the site survey and use it to model the space. There exists a diversity of opinions on room modeling fundamentals and procedures. The following describes how these played out for the Octagon project. I wrap up by describing what I would change about the procedure if I could do it again. 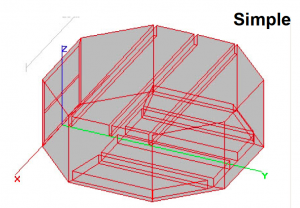 It’s useful to think of the modeling application as a super programmable reverberation unit rather than as a literal acoustical scale model. Both produce reflected fields of impulses, and allow user-modification the reflected sound energy. Neither can duplicate reality but both can come darn close. The model is a pen and ink drawing of the room’s acoustics, not a photograph. It’s an acoustical “scratchpad” for evaluating changes made to room/loudspeaker variables, which is exactly what we will use it for later in this series of articles.

A platform-independent modeling method is useful for error checking, comparisons and efficiency. At the time of this project, the DXF file format was the only common denominator 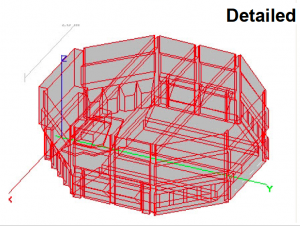 between the major prediction platforms, so my initial room model was done in AutoCad and exported to DXF. It’s never a good idea to be learning something at the same time you are trying to produce useful results, but my limited ACAD experience at that time put me in that situation. The model was begun in early December and I was still making refinements a month later with much “rabbit chasing” and a few false starts in between. I produced 3 room models (shown at right as captured from the DXF converter module of CATT-Acoustic). One model is very simple, one has more detail, and a third is for experimentation with adding specific acoustical treatment in the space. One thing I wished to evaluate in the exercise was the effect that higher model detail would have on the predictions and auralizations.

The simple model can be generated very quickly. It is correct with regard to room volume and basic geometry. When embellished with appropriate absorption data, it should allow accurate prediction of the direct field coverage and meaningful estimates of the direct-to-reverberant ratio 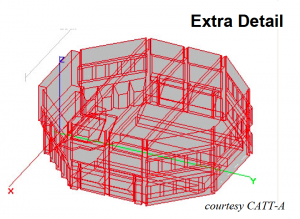 at various listener positions. Since the walls lack detail, any echoes should be exaggerated – not a bad thing when you want to know “worst case.” The RIRs collected during the site survey provided the target reverb times needed to refine the absorption applied to the room surfaces. I like to make the model a bit more reverberant than the real, as this makes it more difficult to achieve the design objectives. It’s a way of building head room into the design. Direct field coverage and direct-to-reverberant ratios are the most important pieces of the design puzzle, and both can be determined from this simple room model.

The detailed models can provide this same set of information, with the added benefits of greater visual appeal and possible increased accuracy in specular reflection predictions. Adding more detail can increase the modeling time considerably, and the additional information provided to the designer is by nature less predictable due to its increased complexity. It’s a lot more work for a little more information – an important trade-off to understand. A comparison of the reflectograms for the two models

(Figs. 1 and 2) show that the simple model produced a greater number of 1st-order reflections. This represents a worst-case scenario, as low-order reflections are more likely to have sufficient energy to be perceived as echoes. 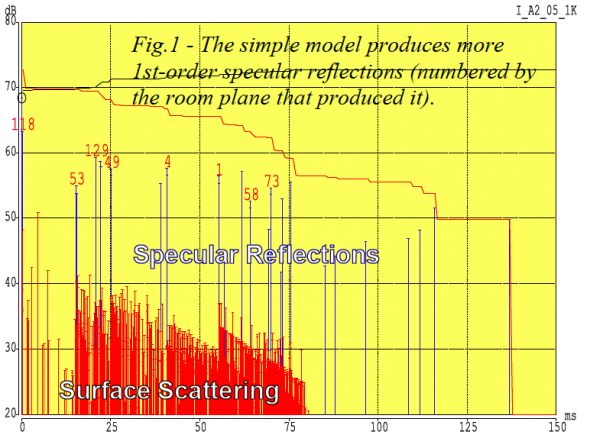 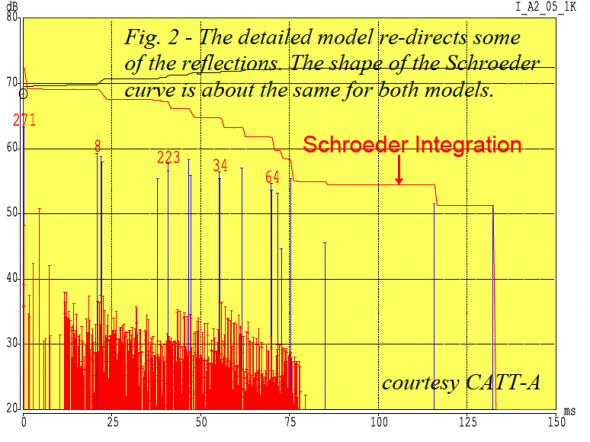 Consider the extremes with regard to detail – a simple wireframe with smooth surfaces and no surface scattering will produce many echoes in the predicted RIRs – best for LF prediction with decreasing accuracy at HF. A very detailed model (i.e. lots of geometric complexity and surface detail) will produce a more accurate HF echogram, but decreasing accuracy at LF. Since adding detail adds HF diffusion, and this helps the performance of the sound system, a simple model that uses frequency-dependent scattering can give good HF and LF results.

Anytime there are two extremes, a compromise is suggested. A hybrid model could be constructed with accurate room volume and simple geometry, but with scattering coefficients to randomize geometrically complex surfaces. This will allow them to still produce a specular reflection, but with decreased emphasis since some of the energy is scattered. Surfaces will either be flat, scattering or something in-between. Rather than actually modeling a surface with high detail, a frequency-dependent scattering coefficient can be assigned to “de-specularize” it. This will provide the worst case effect for surfaces with no scattering and hopefully make them stand out in the predictions. In effect, a highly detailed model has the same effect as adding scattering to a simple model, and the latter will be more accurate at LF.

The validity of either approach lies ultimately in the predicted results and how they compare with actual RIRs gathered in the space. If the detailed model produces better correlation with the actual, then the effort to produce the detailed model may be worth it. If not, then we can get the answers we need in a lot less time by modeling with less detail. A visual comparison of Figures 1 and 2 suggest that there will be significant differences in how they sound. The auralizations suggest otherwise – likely due to the similarity in the Schroeder curves.

To qualify the room model I used GratisVolver to produce a convolution with a measured RIR for some test positions (TP5 used here – Fig. 3). I then produced an auralization in CATT Acoustic by predicting the RIR for TP5, using CLF data and proper placement of the loudspeaker in the room model. A stereo-coincident cardioid receiver was used, as this matched the recorder used to gather the RIRs. Click on the links below to compare the convolution with the auralizations, and the auralizations with each other. 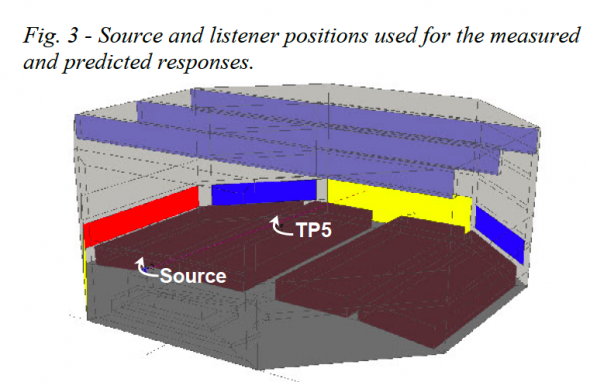 If I were to repeat this project today, I would go with the simple room model, generate it in Sketchup and export it to the modeling program. The simple model is adequate for the intended purpose, and I would be about the business of actually designing the sound system much sooner.

The use of simple and efficient data collection and room modeling processes have now enabled us to evaluate potential loudspeaker selections and placements by listening, and the design process can begin. pb