The Oklahoma City Civic Center Music Hall is rated as one of the top 3 in the USA. Syn-Aud-Con takes a tour, and provides some measured data for experimentation.

The Oklahoma City Core and Technicians classes were treated to an evening visit to the Oklahoma City Civic Center Music Hall. This is a highly regarded performance space used for symphonic and theatrical productions.

After 60 years as serving as a major cultural and entertainment hub for the State of Oklahoma, the newly renovated Civic Center Music Hall now provides the citizens of Oklahoma City with a European-Style concert hall experience. The $53 million dollar renovation preserved the building’s historic exterior, while creating a Broadway-quality performing arts venue with superior acoustical capabilities.

It would be a shame to visit this space and not collect some acoustical data. Since the purpose of this visit was not to make room measurements, the conditions were not ideal for such. Many people were milling around and talking, and there was only opportunity to feed the sweep signal into the LCR channels simultaneously. While this does not affect the reverberation time, it does affect the other metrics such as C50 and STI. Since a tour was in progress, the sweep level had to be kept low enough to talk over. You can judge the apparent SNR by listening to the raw sweep as recorded on-axis with the center array, from the same distance shown in Figure 1. It would be nice to have had a few hours in the space for some refined measurements, but we got useful data with almost no expenditure of time by just recording some sweeps.

The photos were made with a lens focal length that emulates human vision, so that the correct distance perspective is preserved. I stitched them together in panorama software to provide the wide views. This method can be useful when correlation between sight and sound is desired.

The system design was by Jaffe-Holden Acoustics, and the exceptionally clean installation was by Ford Audio-Video Systems, Inc. Jim Ford helped conduct the tour, and was responsible for getting the iPod sweep signal fed through the system for our impromptu measurements.

The stereo IRs can be downloaded for convolution and post-processing. They can be found in Project #32 on the SAC IR Exchange. pb 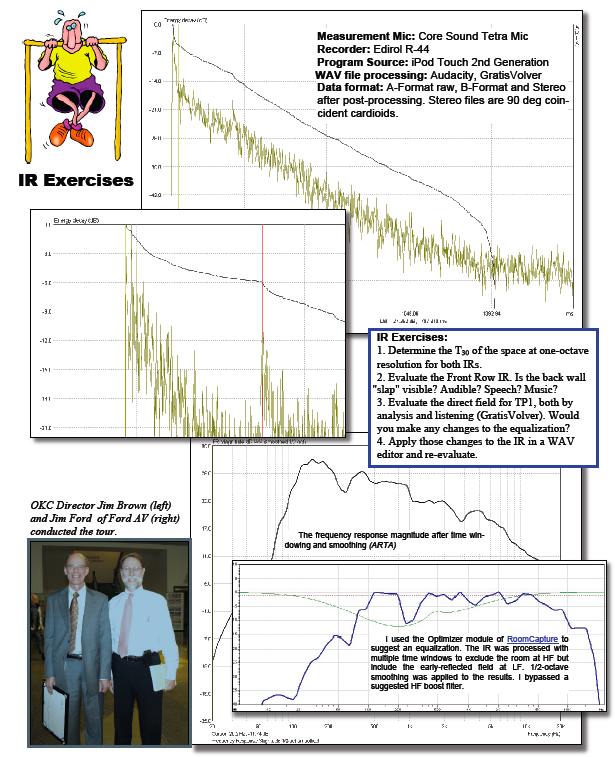 Roll your own acoustic source for STI testing
Collecting Binaural Data for Recordings - Accuracy vs Realism
How to extract an impulse response from a recorded sweep?
30 Years of SynAudCon Synergy
Real-World Reverberation - PureVerb™
Large Room Acoustics