Modern measurement systems and Standards add both clarity and confusion to the determination of the reverberation time of a space.

The reverberation time (RT) is one of the most fundamental room measurements. It gives a broad brush stroke description of the general acoustical behavior of a space, paving the way for the use of other metrics to determine clarity and direct-to-reverberant ratios.

Wallace Clement Sabine was the first to formalize the RT into an acoustic metric. His method of measurement involved a program source, a stopwatch and a quiet room. Sabine determined that 60 dB of room decay was audible in a quiet space, so he formalized the RT60 to describe it. Sabine’s work provided the statistical RT formulas that are still in use today.

Further refinements came with the ability to measure the Room Impulse Response (RIR)(Fig. 1). ISO3382 is an international Standard for “scoring” the RIR. First, the squared RIR is backward integrated (energy summed from right-to-left, a.k.a. the Schroeder curve) (Fig. 2). The slope of the Schroeder curve is used to determine various decay times. Two of the ISO 3382 decay metrics that are commonly used by sound system designers include:

– Based on a straight-line curve fit between the 0 dB to -10 dB points of the Schroeder curve, extrapolated to 60 dB of decay (Fig. 4). A strong direct field will produce an EDT that is less than (steeper slope) than the T30. This is a desirable attribute for increased speech intelligibility or music clarity. Strong early reflections have a similar effect, which is why acoustician’s often specify band shells and acoustic clouds to enhance the stage sound in large spaces.

The T30 and EDT provide important information about the way that sound behaves in a room. Both are most applicable when a homogeneous reverberant field exists (i.e. medium to large rooms with low absorption). Their use in small spaces (i.e. control rooms, home theaters, and other rooms with high absorption relative to room volume) is questionable. 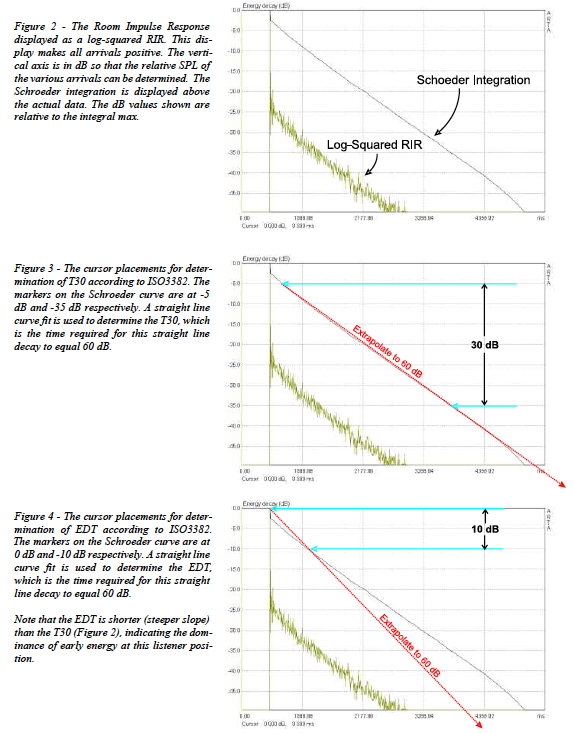 The determination of T30 and EDT according to ISO3382 seems straightforward, so one would expect to get the same result from any measurement program. But, this is not the case. So much for Standards!

One reason is based on the intended use of the Standard. ISO3382 was not created for sound system evaluation, per se. It was created to be used for room acoustics testing. For such tests, a low-directivity sound source is prescribed. This can be an actual impulsive source, like a balloon pop or starter’s pistol. If a loudspeaker is used, it should have low directivity (i.e. a dodecahedron). When measured in this way, the -5 dB point on the Schroeder curve is typically beyond the direct arrival and early-reflection contributions and on a straight segment of the decay. When highly directional sound reinforcement loudspeakers are used, the steeper slope of the early Schroeder curve extends further into the RIR. In such cases the -5dB start of the T30 calculation may be too early, producing a shorter T30 (steeper slope) than the actual RT. While strong early energy is a good thing for sound systems, it can fool the algorithm used to determine the actual RT.

Long before the existence of a standard, reverb times were determined from the manual placement of cursors on the Schroeder curve (Fig. 5). A left and right cursor were used to segment a straight portion of the curve and the RT (RT60 in those days) was determined from these placements. The left cursor was moved beyond the slope change caused by the early reflections and direct field (typically >300 ms for most rooms). Since ISO3382 defines the slope to be from -5 dB to -35 dB on the Schroeder curve, this can result in the “start point” being on a different slope of the curve than the “end point.” Figure 6 shows how the 8 kHz octave band can trick a measurement program. This auto ISO3382 algorithm reports a 13 second 8kHz-octave T30! Manual cursor placements yield the correct RT. 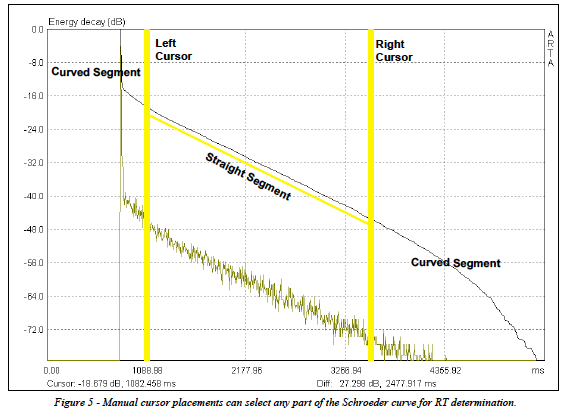 The ISO Standard is defined for 30 dB of room decay, and extrapolated to 60 dB. The reason is that actual impulsive testing tends to produce RIRs with poor signal-to-noise ratio, so one can rarely get the required 60 dB of decay before running into the noise floor. The presence of noise causes a reduction in the slope of the late part of the Schroeder curve (Fig. 6). It can be impractical to expect a quiet environment when testing real spaces (Sabine did his testing in the middle of the night), where Murphy’s Law assures that a vacuum cleaner is likely running somewhere in the vicinity. 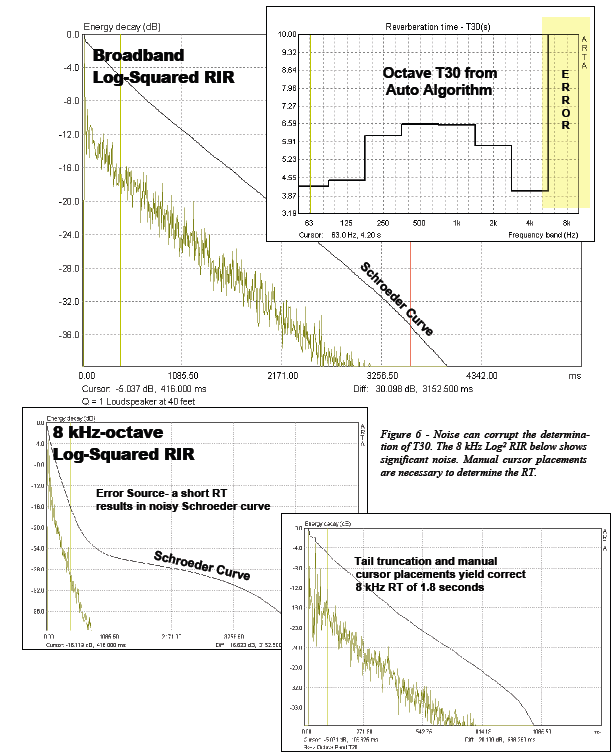 Measurement systems used for testing sound systems can easily yield 60 dB or more of SNR, so it is not necessary to base the RT on only 30 dB of decay. The slope-change at the end of the Schroeder curve is most often due to noise being integrated along with reverberation. Most measurement programs provide automatic or manual methods for excluding this part of the curve from the calculation. But, what if it’s not noise?

Some rooms can actually have a triple-sloped Schroeder curve. This can happen in “coupled spaces” where two different sized rooms are joined. The first 10 dB (the basis for EDT) is steep due to a strong direct field and/or strong early reflections. A lower-slope straight-line section is next (for one space) and a lower-yet slope segment is next for the more reverberant of the two coupled spaces. These slope changes can cause problems for automatic T30 algorithms that are programmed according to the Standard. Again, manual cursors are often provided to handle these special cases.

And how does one know if a late slope change is due to noise or a multi-sloped room? A good noise compensation algorithm can often make the distinction, but no standard exists so this is left up to the ingenuity of the programmer.

Interpretation of the Standard

Another source of differences between measurement platforms lies in how the Standard is interpreted. The Standard is based on a “best fit linear regression line” to the Schroeder curve and should be “free” at both ends. A line connecting the relevant levels (0 to -10 dB for EDT, -5 to =35 dB for T30) is not the Standard but is sometimes used. Figure 7 shows an EDT determined from a straight line that is free on both ends. 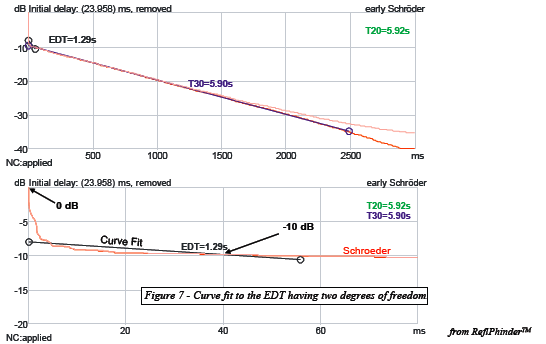 This should all serve as a reminder that the measurement and interpretation of acoustical data requires some judgment. Here are some things to remember:

I would like to extend a special thank you to Bengt-Inge Dalenback (CATT-A author) for ongoing discussions and clarifications on this topic. pb

Roll your own acoustic source for STI testing
Collecting Binaural Data for Recordings - Accuracy vs Realism
How to extract an impulse response from a recorded sweep?
30 Years of SynAudCon Synergy
Real-World Reverberation - PureVerb™
A Closer Look at Loudspeaker Coverage Angles