How Loud is a Shuttle Launch? Pat Brown decided to record the space shuttle launch. He documented his findings in this article.

Our recent trip to Orlando for the NSCA show afforded us the opportunity to observe and record a space shuttle launch. After considering the options, I decided to keep the instrumentation simple and make an audio recording of the event that could later be transferred to the PC for analysis. 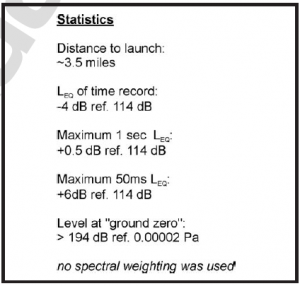 included a mini-disc recorder, Earthworks mic, and a calibrator. The calibrator was used to provide a reference tone that could later be used to calibrate a measurement system. I really had no idea what levels to expect, so I made some estimates based on a knowledge of the observation distance (3.5 miles) and the maximum peak level that could be reproduced (LP = 94 dB). The NASA technicians said that hearing protection was not required, which meant that the levels probably did not rival those produced at automobile races in the mid band (LA = 110 – 120 dB). The shear distance to the sight provided an effective buffer, so I decided to calibrate the measurement system to LP =114dB at 2kHz with about 20dB for the signal peaks. The estimates were close enough, as no instrument clipping was experienced during the recording. The extreme low frequency content of the launch could not be captured with my simple apparatus.

Figure 1 shows the amplitude vs. time record of the recording, including the calibration tone. The event marked “launch” was the sound picked up from the press site public address system. Their microphone is several miles from “ground zero.” This fact along with a lack of knowledge of the signal propagation time through the communication system made an accurate calculation of the distance to the shuttle impossible. 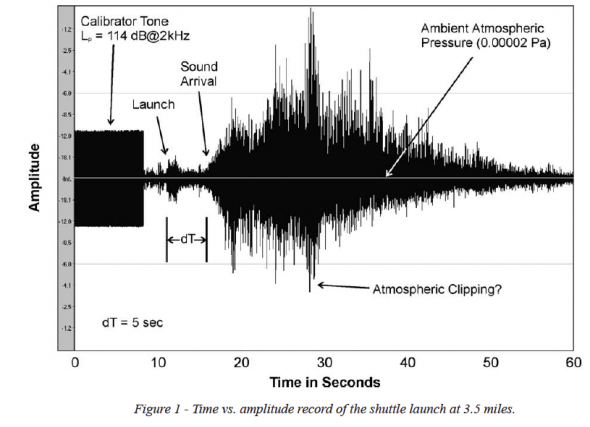 Figure 2 shows the power spectrum of the launch. The low frequency nature of the noise allowed us to talk over it during the launch. Subjectively, it sounded like an amplifier being severely clipped, probably due to full modulation of the atmosphere (complete vacuum on the under pressure). 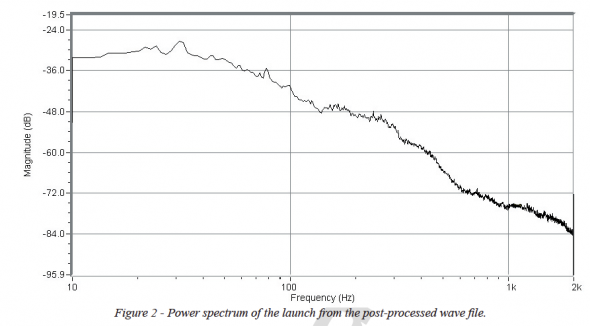 Figure 3 provides a nomograph to estimate the level closer to the launch site. Some launch level trivia is provided at right. pb

How Do Boundaries Affect Loudspeakers?
Far-field Criteria for Loudspeaker Balloon Data
Loudspeaker Power Ratings - Why all the Fuss About Power?
Manifold Drivers - How Much Additional SPL is Realized.
Using Limiters to Help Protect Loudspeakers
Target SPL and Required Amplifier Size