How does a Beam-steered Line Array compare to a Horn Array in the same space? Pat Brown compared the two at St. Monica Catholic Church.

In June I had the opportunity to attend a line array demo a few hours from home base. The product was the Iconyx line array from Renkus-Heinz. A/V Marketing of Indianapolis (Kurt and Maria Gish) hosted the demo with support staff from Renkus-Heinz. It was held at St. Monica Catholic Church.

The auditorium has a mid band reverberation time of about 2.5s, long enough to allow significant reverberant sound to build when continuously excited. The line array was mounted on a portable lift. The staff graciously allowed me to record some log-sweeps at a few listener positions. I later convolved these with their inverses to get the impulse responses 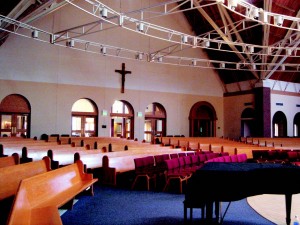 using Gratisvolver. The measured IRs were in agreement with the subjective listening tests in that the intelligibility was acceptable over the coverage area of the line array (about one-half of the auditorium).

We also listened to the house system, which consists of some large format horns mounted near the ceiling. The intelligibility was subjectively worse than the line array, and the IRs and resultant metrics supported this conclusion. In its defense it was providing coverage to the entire room. An additional line array to complete the coverage would be expected to reduce the clarity scores by 3dB in the already-covered areas.

To make a comparison of the two systems I used the laser range finder to determine the distance to the array, and then picked a mic position at the same distance from the line array. This gave a 12 meter response for each. The IRs were opened in EASERA and processed to give some relevant metrics (shown below).

I have made the IRs available for download in WAV file format. These can be opened in most measurement programs, and can be convolved with music or speech in Gratisvolver. www.synaudcon.com/nl/nl064/stmonIRs.zip

Beam-steered line arrays continue to prove themselves as an alternative for producing intelligible speech in difficult spaces. They represent a different set of compromises than traditional approaches that may be the best solution for some venues. pb 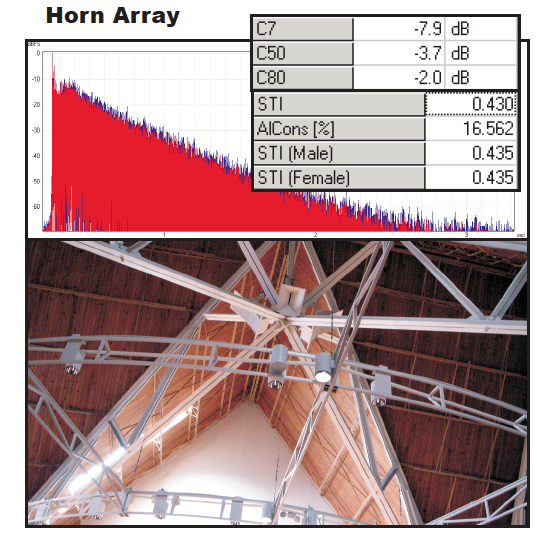 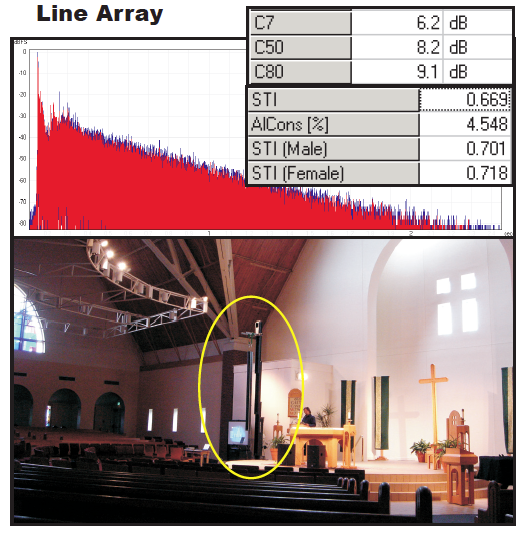