Which battery will last the longest?  Pat Brown does a study  to evaluate the battery endurance of several brands.

A recent discussion on the SAC listserv prompted me to conduct a run-down test on 9V and AA batteries.

Since I didn’t have a fuzzy, pink bunny beating a drum to use as a load for the batteries, I elected to use wireless microphone transmitters. This makes the testing and run times more relevant for sound system applications. The scope of the study was to evaluate the battery endurance, not the transmitters – which are very different in their design and principle of operation.

For the 9V transmitter I used the Shure SC1-TA. It has a relatively low current drain (50mA) that remains relatively constant with increasing time until the battery voltage is insufficient (6.5V) to keep the unit on. This is a VHF system. Note: Shure does not recommend the use of 9.6V rechargeable batteries! They worked in my older transmitter, but may not work on newer models.

For the AA testing I used the Lectrosonics SM. It is an ultra-miniature digital hybrid UHF transmitter than runs from a single AA cell. The current draw is voltage-dependent. The transmitter turns off when the battery voltage drops to 0.9VDC. 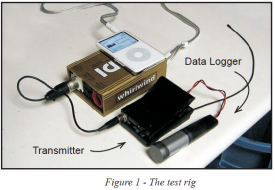 To test the batteries I drove the wireless transmitters with a balanced aux level signal from an Ipod interfaced to each belt pack via a passive summing/balancing interface (Figure 1). Each was driven with program to produce a full-scale receive signal level on its receiver for the duration of the test.

The turn-off voltage and current draw for each transmitter was determined with a variable DC supply (with on-board ammeter) and an oscilloscope. The battery voltage was monitored with a programmable USB data logger, chosen for its very high impedance and minimal loading of the battery. Voltage samples were gathered at 1 minute intervals and the test duration extended well beyond the transmitter turn-off time. The results were plotted using a graphing program.

Figure 2 shows the results of the 9V tests. I included a plot of cost vs. time, as well as an estimate of how many charges would be required for the rechargeable batteries to become cheaper than the disposables (not counting the cost of the charger). The 500mA Lithium Polymer 9V battery (www.ipower.com) is a relatively new development and was suggested by Gordon Moore of Lectrosonics (the 400mAh unit from the same vendor should be avoided for high current drain applications).

The two major specifications given for batteries are the voltage (in volts DC) and the available current (in ampere hours). If a battery can provide one ampere (1 A) of current (flow) for one hour, it has a capacity of 1 A·h. If it can provide 1 A for 100 hours, its capacity is 100 A·h. Most small batteries are rated in mAh.

As with audio gear, “one number” specs can be deceiving. For example, the NiMH 9V had the highest voltage when fully charged (about 9.5VDC). Yet, it had the shortest life. The Li-Polymer 9V had the lowest fullcharge voltage (about 8.2VDC) but lasted the longest. So, higher voltage is not necessarily better.

The mAh rating of a battery should only be used as a rough estimate of its suitability for an application. For example, the Li-Polymer 9V has a mAh rating that is about 3 times the NiMH 9V, yet it lasted about 6 times longer in the endurance test. Also the disposable AA batteries have higher mAh ratings than the rechargeables, but did not last nearly as long. pb

So what can you do with a box of exhausted batteries?

You can test the battery tester! In the run down tests I often let the test rig run overnight to exhaust the battery-under-test. The data downloaded from the data logger showed what the voltage did as a function of time. Most batteries returned to near their full charge voltage once the transmitter shut off. Figure 1 shows the time record for one of the batteries.

If the exhausted battery were tested with a simple DC voltmeter one could conclude that it was fresh. This is because a voltmeter has an extremely high input impedance to minimize loading on the circuit being tested. A good battery tester will load the battery prior to reading the voltage.

Larry Pajakowski turned the listserv on to an excellent battery tester. The ZTS Pulse Load battery tester (www.ztsinc.com). After a fully automatic test cycle, percentage of remaining battery capacity is indicated on the LED bar display.

There are several models available and all are relatively low cost (less than $50USD). Unlike my DC voltmeter, the ZTS correctly indicated the depleted state of each battery after the run down test. pb 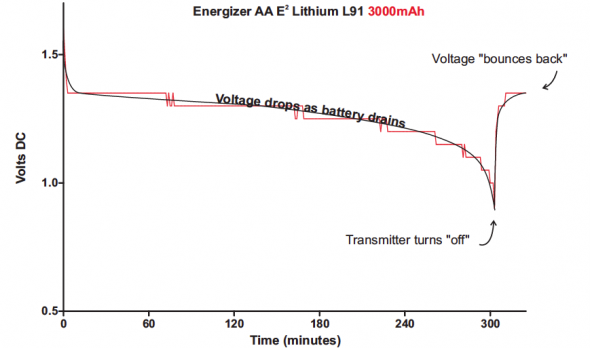 Collecting Binaural Data for Recordings - Accuracy vs Realism
The Amplifier-to-Loudspeaker Interface
The Floor-Bounce-Effect - Mic Placement for Equalization
Measuring RMS Voltage: Many Meters Will Do
Impedance Measurement
Loudspeaker Power Ratings - Why all the Fuss About Power?