Understanding the ideal loudspeaker directivity will form an understanding of the trade-offs involved in real-world devices.

When it comes to loudspeakers and the audio marketplace, one word comes to mind-diversity. How can there be so many different types of loudspeakers? Which one is the best? Which characteristics are important and which ones aren’t. When I measure a loudspeaker, what should I look for? There are no simple answers to these questions, but it is helpful to consider a loudspeaker with “ideal” characteristics to form an understanding of the trade-offs involved in real-world devices.

First, I use the term “ideal” to describe a loudspeaker whose essential characteristics can be accurately and meaningfully described with a few simple numbers. The concept is useful to provide a means of evaluating the characteristics of real-world loudspeakers, which in all cases are more complex than the ideal device.

The ideal loudspeaker would radiate sound only where the system designer wants it to go. In large rooms, such a device would allow sound to be directed to the audience and away from walls, ceilings and other reective surfaces. A useful specication for describing the directivity of a loudspeaker is the directivity factor, or Q. The Q of a loudspeaker is the ratio of sound pressure- squared at one angle (a single point in space) from the loudspeaker to the average sound pressure-squared radiated from the loudspeaker. Since it only considers one angle (a single direction), many Q ratings are required to fully characterize the radiation from a device. A useful simplication is to consider the “axial” Q – the directivity factor for the “on-axis” position of the loudspeaker. This is usually the point of highest sound pressure deviation, and the optimal listener position. Q can be expressed in decibels by taking its base 10 logarithm and multiplying by 10. This is the loudspeaker’s directivity index and describes the loudness advantage at a particular angle over the same total acoustic energy radiated omnidirectionally.

An omnidirectional loudspeaker would have the same Q (Q = 1) at every listener angle, and therefore it wouldn’t matter where the listener was positioned – a device that physicists refer to as a “point” source. Most sound reinforcement loudspeakers utilize directivity to help conne the sound to the audience area as well as increase the LP in a particular direction over that of an omni device.

The ideal directional loudspeaker would conne all of its radiated energy to an area, forming a cone of sound radiation. With the loudspeaker positioned at the origin, the radiation could be described by a single angle, such as 90, 60, or 40 degrees. All points within the coverage angle would have the same sound pressure, and no energy would spill outside of the cone. All listener positions within the cone would have the same Q, so only a single rating would be required. For the ideal loudspeaker, this radiation characteristic would be independent of frequency, again allowing a single Q rating to fully describe the directivity of the device for all points within the coverage angle for all frequencies. Figure 1 shows the magnitude vs. phase of the device, Figure 2 shows what the three-dimensional directivity balloon would look like, and Figure 3 shows what the Q vs. frequency plot would look like. 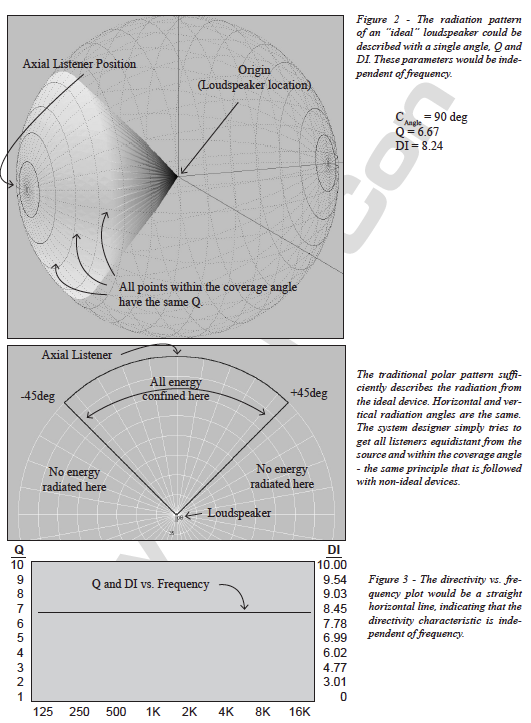 The directivity factor Q provides a simple but effective way to describe the sound radiation from a source. Manipulation of Q is a major tool for system designers, who must select directivity characteristics that are appropriate for an application. 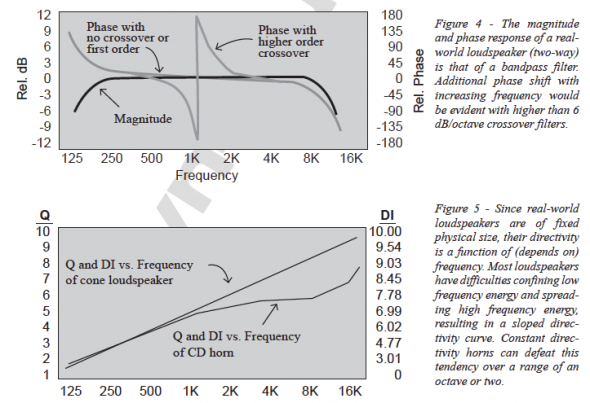 Physically realizable loudspeakers fall short of this ideal characteristic. While a coverage angle can be used to describe the sound radiation, real loudspeakers radiate energy beyond the connes of this angle. In addition, the sound pressure-squared level varies within the angle, requiring a different Q rating for different listener positions. Additionally, the sound radiation pattern varies with frequency. These factors mean that our simple “one number describes all” Q rating must be replaced with complex angular and frequency-dependent directivity speccations, usually displayed as directivity balloons at sufcient frequency intervals. Current limitations on computing power make one-third octave a practical choice. Since directivity varies with frequency, wide band-width systems require the audible spectrum to be subdivided two or more times and routed to separate drivers in the loudspeaker system. Each driver is optimized for a specic bandwidth, necessitating the use of crossover networks to control the transitions. This makes the loudspeaker system’s directivity characteristics much more complicated than the ideal case, requiring that simple “one number” ratings be replaced with graphs of Q vs. frequency and three-dimensional directivity balloons. Such balloons can be used to yield coverage isobars that can be projected onto an audience area to determine the LP over the area. The large number of calculations required to evaluate audience coverage are best left to a room modeling applications for a personal computer, such as Ulysses™, EASE™, or CATT Acoustic™.

The ideal device is useful to system designers for determining what can work for a particular design. The next step is to replace the ideal device with real-world devices and see how much the performance in impaired. Well-controlled devices (i.e. constant-directivity horns) emulate the ideal device rather well and are the easiest with which to design systems. pb 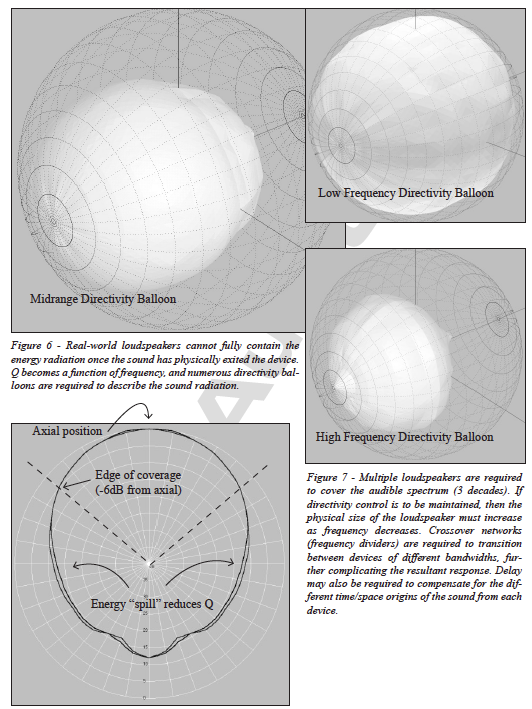