Dale Shirk presents a practical way to check direct-field coverage in live spaces using tools you may already own.

It seems logical to stroll around in a room with a sound level meter to check coverage. This only works when there is no significant reflected energy present. In most spaces, the “time blindness” of this technique will render it useless. Dale Shirk presents a practical way to check coverage in live spaces using tools you may already own.

Uniform direct field coverage is one of the most important parameters in a sound reinforcement system. If certain seats aren’t covered well, then for those listeners, the sound system isn’t doing its job well. Better to have decent sound quality for everyone, than to have glorious sound for a few and bad sound for the rest.

There are numerous precision measurement systems that can determine the direct field level at a given location. What’s needed is a technique to quickly determine coverage, at least approximately, and help to determine where one may wish to place a measurement microphone for more detailed study. This is a great aid in evaluating an existing system.

However, when we look at an Envelope-Time-Curve (ETC) or a log-squared impulse response of a room taken from a location beyond DC, we see that often the direct sound is still the highest level in the measurement. How is this possible? DC is a metric of a steady continuous signal. The reverberant level is the sum of a number of arrivals spread out over time. Taken individually, these later arrivals should almost always be lower in level than the direct sound. This is only natural, since they have traveled farther and have reflected off of something. But when combined with many other reflections in the room, they add up to a higher level than the direct sound.

Measurement systems effectively gate out the reflections, based on arrival times. This isn’t very convenient with a hand-held carry-around device, since the time-of-flight from the loudspeaker to the measurement microphone will change as you move.

I propose we separate direct arrivals from reflections by peak level. If we pulse the loudspeaker with a click or a brief burst of noise, and measure that burst with a peak reading, peak holding meter, we will read the level of the highest single arrival. In most cases this should be the direct sound. It certainly will be the case in the direct coverage pattern of a well designed sound system in a moderately dry room. Because the reflections are each a brief transient, arriving at differing times, they will not have an opportunity to combine together to exceed the direct level.

This technique is only effective for high frequencies, where we can reasonably expect the excitation pulse to be shorter in time than the spacing between the direct arrival and early reflections. Lower frequencies must be integrated over a longer time, and reflections may be inseparable from the direct sound. This is true of any measurement. Time-Frequency uncertainty will not be violated.

For several years I’ve been using a polarity pulse, along with a peak-reading SLM with octave filters to measure quasi-direct field levels. I walk around “mapping” the coverage in the room. This is based on a number of assumptions:

Your ears will tell you where these assumptions may be false, and you can place the test mic of a precision analyzer there to investigate further. I’ve done this often enough with an EASE map in one hand, and using the TEF to make spot checks, that I’m quite confident of it, at least in small and medium sized relatively dry rooms.

You’ll need a sound level meter with a peak hold function, and preferably octave band filters as well. I’ve used a GenRad 1933, GenRad 1982, or Terrasonde Audio Toolbox. Use either a pulse from a polarity tester, or a very slow square wave that gives you one click every 2-3 seconds. It helps if you use the channel EQ to emphasize the middle and high frequencies. I usually check at 1, 2, and 4 KHz. Walk around checking readings and pushing the hold release button between each.

Hopefully this technique, using equipment you may already own, will help you to evaluate a sound system quickly and locate possible problem areas. ds 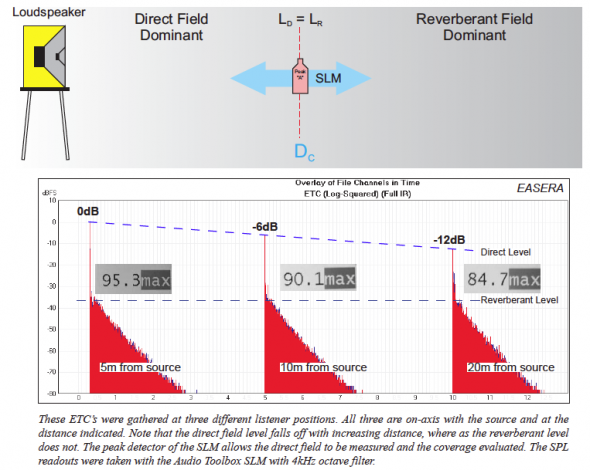