Pat Brown showed how he miked a choir to get a lot of acoustic gain and no feedback. MP3 included.

I recently helped provide sound reinforcement for a local benefit concert. “An Evening in America – 1944” was a tribute to the military veterans of that era. The performers included the Thoroughbreds (a 20-member male chorus), the Don Kreckel Orchestra and the Ladies for Liberty (an Andrews Sisters – like trio). Narration was provided by Ron Fox, whom all of you have unwittingly heard through paging systems at airports around the world. While a review of the event falls outside the scope of the SAC Newsletter, at least one aspect of it should be of interest to anyone who has tried to achieve high levels of acoustic gain from choir mics.

The challenge of this event would be in achieving sufficient acoustic gain for the choir mics and orchestra overheads in the 1200-seat auditorium. Such distance-miking techniques always presents feedback problems. I was especially concerned about the male chorus, and decided early on that some aggressive action would be required if these guys were going to be audible above the orchestra.

When addressing the issue of feedback, many look to specialized microphones and signal processing, such as feedback notch filters. I decided to lean more heavily on something that is often overlooked – loudspeaker directivity. Unlike the other methods, increasing loudspeaker Q yields a “double whammy” – less sound toward the mics and more sound towards the audience. Since this was a one-time event with portable reinforcement, the ideal overhead placement of loudspeakers was not an option. I chose a left/right mono system, with loudspeakers zoned to each half of the audience. The center aisle would provide a nice transition zone. The loudspeaker configuration used for each side was a biamped system that consisted of a coaxial MF/HF device (Frazier CAT76™ with internal passive crossover) and a dual-15 LF box. I showed polars and balloons of the CAT76 at the EQ07 Workshop in 2007. Due to its large physical size, the pattern control extends down through the 500Hz octave band, and the coaxial design produces smooth polars, even through the crossover region. I did a quick floor plan map of the room to check direct field coverage and determined that it should be adequate for most of the main floor. It was well worth the 10 minutes required, as it revealed that a sufficient portion of the main floor would be adequately covered. It also revealed that the stage spill would be minimal, which should result in improved acoustic gain. I crossed over into the LF boxes at 200Hz, a decision based on the published loudspeaker data for the CAT76, an axial transfer function measurement and some subjective listening.

Two Audix Microboom™ cardioid microphones were used to cover the chorus (Figure 1). Their low-profile carbon fiber booms made them virtually invisible to the audience, while placing them at the proper overhead position.

Time constraints did not allow time for an exhaustive equalization session. In fact, there was barely time to get an axial IR/Transfer Function, as my long mic cable for the EQ session was needed to deliver a line level feed to the video booth. So, I did an axial shot in the far-field of the MF/HF to check the response. Two parametric filters were used to flatten the response of the left loudspeaker. I repeated for the right to confirm that the same two filters were required. In retrospect, the CLF data file provided sufficient information to accomplish the same thing, but it is always a good idea to check (and interesting as well).

Conventional wisdom suggests that the LF box should be positioned below or beside the MF/HF. Unfortunately this location blocked the sight lines to part of the stage, so the promoter insisted on an alternate location. The only choice was in the pit area, about 10 feet in front of the CAT76. This actually sounded fine, and no delay was deemed necessary to address the alignment issue. Ironically this location provided a benefit regarding acoustic gain since it placed the low directivity part of the system further from the microphones. While I wouldn’t suggest this much separation at such a high crossover frequency, it worked for this event. 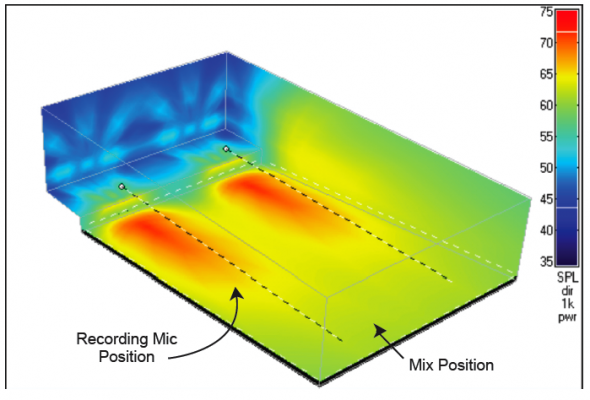 After everything was hooked up and gain structure/operating levels established I zeroed the channel faders and advanced the trim on the two chorus mic channels. I was able to max these out with no feedback. The background clamor from the stage workers was clearly audible at mix position (which was unfortunately over 100 feet from the stage – Figure 2). I then advanced the master beyond its current position until the system became unstable due to a LF feedback through the left chorus mic (Mic1). Satisfied that the gain was good, I backed it off and muted the mics until the chorus took the stage during dress rehearsal. The orchestra (which included over a dozen brass instruments) set the baseline level of the system. I used a couple of condenser mics to provide about 6dB of gain (for the orchestra) at mix position and improved coverage via the main loudspeakers. The SPL was approaching 90dBA-Slow – more than adequate for this type of event. I had no problem getting the chorus level up to balance with the orchestra, and in fact backed it off a bit from the maximum stable setting.

Some chorus members were a bit dissatisfied with the sound. Due to the high loudspeaker directivity, much of what they heard was dominated by sound reflected from the rear of the auditorium. They asked for a monitor, and I tactfully suggested that it couldn’t work due to the unavoidable proximity to the choral mics. I went as far as to try it, and quickly determined that it was a waste of time – they would just have to listen to each other. The choral sound in the audience was outstanding. Some family members of the group said that it was the best they have ever sounded – anecdotal but satisfying. The house sound guy stood and listened with jaw dropped – befuddled by the amount of gain produced by the system. I recorded the event using A-Format at 50 feet from the stage. A sample of the chorus (decoded to stereo) is available from the link on the previous page. 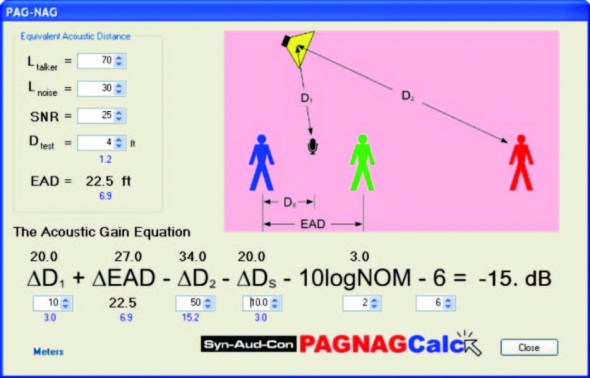 Figure 3 – The classic PAG-NAG calculations estimate that approximately 15dB of gain must be realized by device directivity. 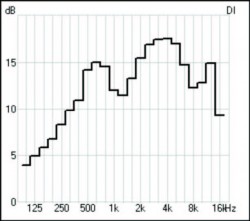 While mics and signal processing are considered by many to be the tools required to achieve acoustic gain, this little exercise showed that it still comes down to the PAG – NAG relationships (Figure 3) outlined many years ago in Sound System Engineering (3rd edition now in print). In this case, the cardioid pattern of the microphone contributed very little to the stability, as the mics were oriented with the null axis toward the ceiling. The “magic” was in the broadband pattern control provided by the loudspeakers. Some orchestra members queried as to whether the vocal mics for the Ladies for Liberty were even “on,” because their vocals were completely inaudible on the stage. I supplied a floor monitor for the Ladies and another for the orchestra, and everyone was happy.

It’s unfortunate that the most effect tool for achieving acoustic gain is often traded away by clients or architects that insist on small loudspeakers. Pattern control is a function of size, and it takes a large device to keep sound off the stage and on the audience. While the CAT76 is a massive device up close, its apparent size is diminished when used in a large space. When acoustic gain is factored into the equation, the required device size becomes non-negotiable. pb 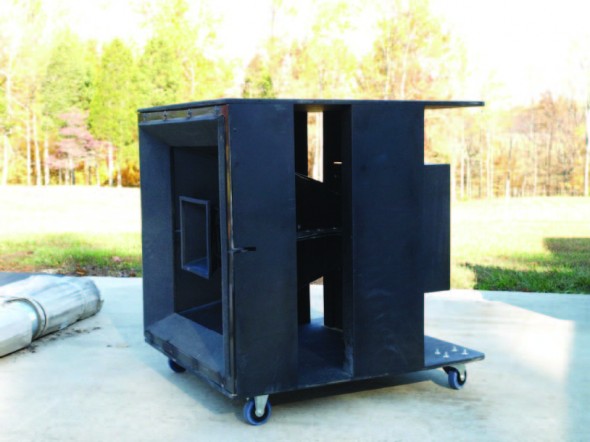 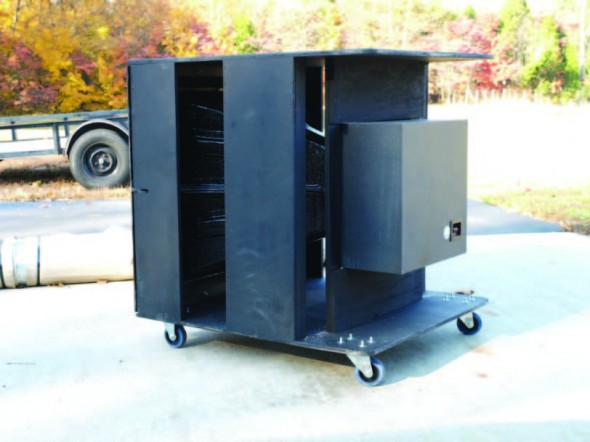