The Phoenix, AZ Sound Reinforcement for Designers class experienced one of our best site visits ever. You can experience it too with the measured data.

The Phoenix, AZ Designers class made an evening site visit to Pinnacle Presbyterian Church. Jim LaRue made the arrangements for the session. Pinnacle is an acoustically interesting space that initially had an under-pew sound system. The current, and likely permanent system is a beam-steered line array – the Iconyx 24 from Renkus- Heinz, which I will refer to as the line source for the remainder of this article.

We used the opportunity to collect some impulse responses of the space. In addition to the Iconyx, a coaxial 8-in. loudspeaker was also measured. I will refer to this as the point source. This scenario would allow some comparisons between the performance of point source and line source devices in this semi-reverberant environment. 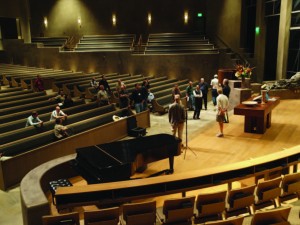 From the photos one can see there are many hard surfaces in this room. The floor and walls have very low absorption. The RIR revealed a broadband reverberation time of about 2 seconds, which given the volume of the space suggests the presence of significant absorption. This was attributed to the ceiling and the pew cushions. The room feature of greatest concern regarding sound reinforcement is the rear wall, which is nearly all glass.

Figure 1 shows a comparison of the octave band polars of both devices. The point source polars are from measured data. The line source polars were generated with a DLL in CATT-Acoustic. Since I do not have the exact settings of the line source beam steering, a simple configuration with no steering is shown, with the acoustic center at the mid-point of the device. The reader should understand that the beam-steering allows this pattern to be morphed into something suitable for the application. 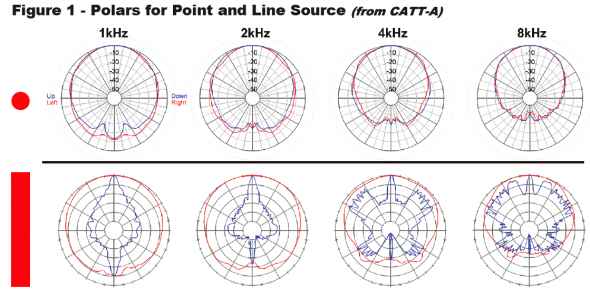 The line source is permanently mounted on the front wall (see photo next page) well above standing height. The 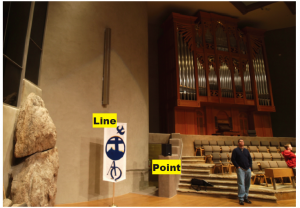 The line and point source locations.

beam-steering capability is used to confine the pattern to the audience areas (vertical control only). The point source was placed at a location that allowed approximately the same distance to the test positions. These positions were determined by using the farthest seat-of-interest as a reference, and then selecting closer positions based on logarithmic spacing. This facilitates the observation of acoustical trends in the data, such as the inverse-square law.

Six positions were tested, and three positions were chosen for inclusion here. The RIRs for all positions are available for download from the Syn-Aud-Con IRExchange (Project #30). 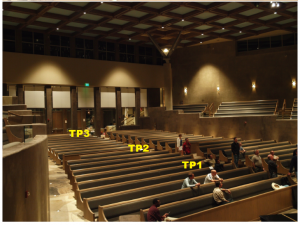 Test positions on the main floor

The RIRs were acquired using the WAV file deconvolution method. An iPod Nano was used to excite the system with a 14 second log sweep. A recording of the sweep was made at each test position with a portable recorder. The Sony PCM D50 has coincident cardioid microphones which provide a good generic stereo RIR. In addition to the D50, the Core Sound TetraMic was used to drive an Edirol R44 recorder. This combination produces 4-channel sweep recordings that can be post-processed into a number of different output formats, including stereo, 5.1 surround, B-Format and others. The RIRs for both recorders are on the Exchange. The TetraMic RIRs were decoded to stereo (coincident cardioids) to allow comparison with the D50 RIRs.

As expected, the point source system produced good intelligibility at the shortest distance, and this degraded as the distance was increased, following roughly the expected inverse-square law fall-off of the direct field vs. distance. The line source produced a positive direct-to-reverberant ratio at all test positions. Listening tests were in agreement with the measured data.

It should be pointed out that the placement of the point source was not ideal for achieving even audience coverage. For a better comparison, it should have an overhead placement and should be aimed at the back row. A higher Q device implemented in this way would have performed much better than the point source/position used. None-the-less, the data taken is illustrative of point source performance along a vector that is normal to the source.

The octave band metrics of each device (Figure 2) show the C50 early-to-late ratio. As expected the line source produced the best C50 for the critical speech intelligibility octaves (1kHz, 2kHz and 4 kHz). It is interesting that the point source actually produced a more positive C50 than the line source for the 8kHz octave band. A look at the polars reveals that the line source loses its beam coherence in this octave band, presumably due to the HF device spacing, and performs more like the point source. Line arrays that utilize smaller devices with closer spacing should be able to extend the pattern control into this octave band as well, with a possible trade-off of LF output due to the smaller cone area. It’s all trade-offs, and there is no free lunch in electro-acoustics. It is incumbent on the sound system designer to know the strengths and weaknesses of the various loudspeaker configurations. 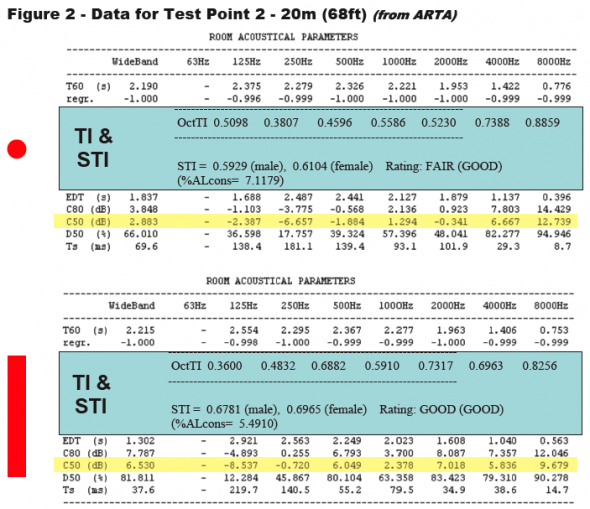 This was a very informative site visit. Pinnacle Presbyterian Church is an interesting space, with a typical history regarding sound reinforcement. The current system performs well and is aesthetically pleasing. We captured some very useful RIR data that all of our readers can evaluate and learn from.

Thanks again to Jim LaRue for making this possible. pb