This article addresses some specifics of the direct field prediction process, specifically the sound radiation patterns from loudspeaker arrays and if DLL is a useful too.

Both are of vital interest to sound system designers, since together they determine what is heard by the listener. There are important differences in how predictions for these two fields are handled. This article addresses some specifics of the direct field prediction process, specifically the sound radiation patterns from loudspeaker arrays.

For a conventional loudspeaker, the prediction software considers the sound radiation into the model to be from a single point in space – a reasonable assumption for a remote observation distance. The energy radiation from this point is weighted with directional information about the sound source, i.e. the sound pressure level radiated in each direction at some specified frequency resolution. This information is usually gathered by measuring the sound pressure level of the loudspeaker at an appropriate distance at some angular resolution (typically 5 degrees). Figure 1 shows the measurement positions and resultant 1kHz balloon for a well-controlled sound source. The measurement distance must be in the far-field of the loudspeaker at all frequencies of interest. The far-field can be described from a number of perspectives, but for the sake of this article we will consider it to be the distance from the loudspeaker beyond which the shape of the radiation balloon does not change with increasing distance. Inside of the far-field the loudspeaker has a distance-dependent radiation pattern shape. This is the near-field of the loudspeaker. To be in the far-field: 1. The radial distance must be large as compared with the linear dimensions of the source, and 2. The radial distance must also be large as compared with the radiating area of the source divided by the operating wavelength.

The sound pressure level in the far-field of a loudspeaker falls off at 6dB per distance doubling – the infamous inverse-square law. Room modeling programs use the inverse-square law to calculate the attenuation of sound as it radiates and reflects through the model.

In most cases, the far-field/near-field distinction is not a factor since all listeners are typically in the far-field of “point source-like” loudspeakers. Large loudspeakers and arrays of loudspeakers violate this assumption, the most notable and currently popular being the line array. If the loudspeaker system is physically large, there are likely a significant number of listeners in the near field. This may be accidental or intentional.

For such sources, the shape of the radiation pattern is distance-dependent. This is due to the greater path-length differences between the individual sources at the shorter listener distances compared to greater distances (Figure 2). For this type of device, the point source assumption is invalid.

Figure 3 shows a 12-element line array of approximately 1m length. Its directivity balloon was measured in the far-field at 5-degree angular intervals. It was measured at 8m (approximate far-field) so the radiation pattern should not change much with increasing distance. To demonstrate the principle, I placed the loudspeaker in a simple cube of varying size, and mapped the radiation pattern onto the walls of the cube. The sound pressure level of the source was increased by 6dB each time the cube size was doubled, keeping the SPL on the wall of the cube consistent. This allows better presentation of the changes in the radiation pattern. If the device is considered to be a point source by the software (even though it is a line), the radiation pattern is independent of distance. The balloon shape will be correct for observation points in the far-field (>8m) but incorrect for closer distances (the near-field). When line sources are modeled as point sources, the SPL will be incorrect for both the near and far fields. There is just no way to model an array as a point without something being wrong. 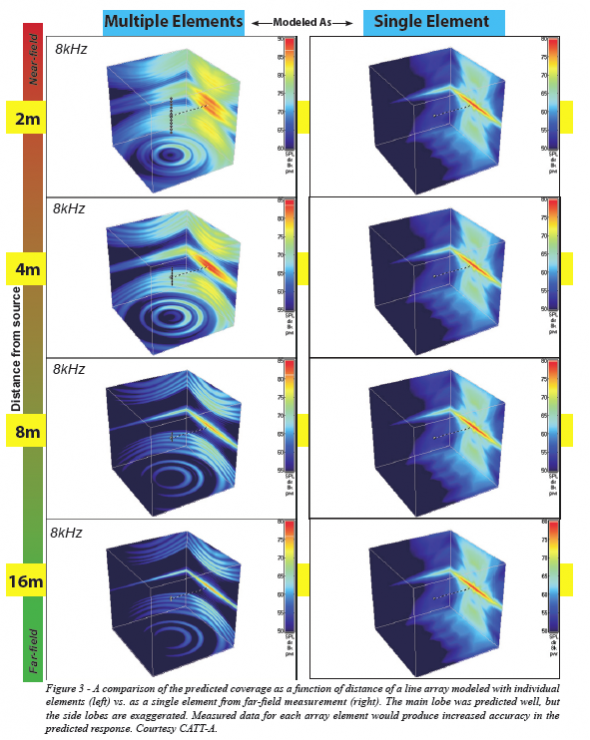 The near-field of a loudspeaker (or array) can be modeled by creating an array of individual sources. Magnitude and phase information is used to determine the resultant SPL as a function of distance. Figure 3 shows the distance-dependent response of the example array modeled as individual sources. Note that as distance increases, the predicted radiation pattern becomes increasingly similar to the measured far-field response.

I have shown that a large sound source may be modeled by breaking it up into individual elements. This was a simple example. In practice the array may be

These variables and others complicate the modeling of complex arrays. This is where the DLL comes in.

Dynamic Link Library – A feature of the Microsoft Windows family of operating systems that supports executable routines–usually serving a specific function or set of functions–to be stored separately as files with the extension .dll, and to be loaded only when called by the program that needs them. This saves memory during program execution and enables code reusability.1

A DLL can be used to facilitate the implementation of loudspeaker arrays in the room model. Many loudspeaker systems have a pre-determined number of variables that can be changed to optimize the array for a given application. The DLL can contain information about the individual array elements, including graphical information. It can facilitate the selection of the number of elements, allowing the array to be quickly scaled in size. In fact, all of the variables mentioned can be programmed into the DLL.

It is also possible for a DLL to determine the values of the variables based on input from the user. For instance, one line array allows the designer to enter the appropriate vertical radiation pattern and vertical steering angle, and the DLL calculates the required delay and spectrum per loudspeaker to produce the desired result. This allows optimum array configurations to be determined with a virtual rather than a physical model.

The use of DLLs to model arrays including the near-field, was first introduced in October 1998 with CATT-Acoustic™ v7.1. This so called DLL Directivity Interface (DDI) enabled generic, i.e. not brand-specific, array modeling (as used here in Fig. 3) as well as dedicated modules for specific arrays, the first of which was for the Duran Audio Intellivox™ series. Later EASE™ 3 introduced another DLL approach allowing for far-field array modeling and with the addition of AURA™ in EASE 4 also the near-field was covered.

Figure 4 shows a custom CATT-A DLL for a Nexo GEO™ line array. This DLL does only geometrical configuring. The linked PDF shows additional examples of DLLs. 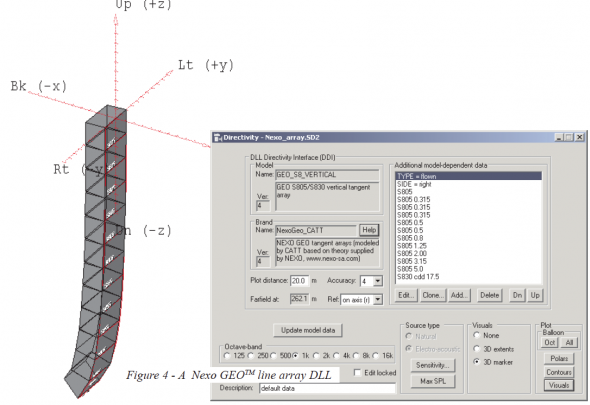 A DLL can aid in the configuration of sophisticated loudspeaker configurations for a venue. It saves the designer time, while increasing the accuracy of the predictions. Some loudspeakers systems are impractical to model without one. Be sure to consult the documentation of your prediction package regarding details about how DLLs are implemented.

Special thanks to Bengt-Inge Dalenback for his valuable input on this article. pb

Some DLL examples can be found at
www.synaudcon.com/nl/nl054/dll_examples.pdf